Eric Bischoff on the Creation of the nWo Logo 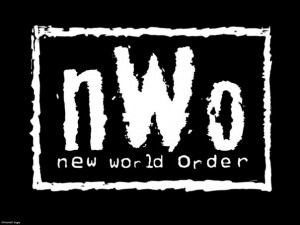 Bischoff noted that former WCW director/producer Craig Leathers went to the designs studio at Disney/MGM Studios to have the nWo logo created. The designers came back with 6-10 examples, and WCW officials finally decided on the logo we know today.

The discussion between Bischoff and Nash went like this:

Bischoff: “Craig Leathers was a director and he actually worked — If you remember, Kevin, we were at the Disney/MGM Studios filming during that period of time because Atlanta was all things Olympics. We had the general idea, the feel for the nWo, and Craig Leathers went over to the design studio at Disney/MGM Studios — We sat down and said, ‘Okay, here’s what these guys represent. Here’s their attitude. Here’s all this.’ Gave them all the parameters and they came back with about six or eight, maybe ten different ideas and one of those ideas was the nWo logo as we know it today. So, as much as I’d like to take credit for it or give credit to Craig Leathers, it was actually somebody at Disney/MGM Studios that came up with that.”

Nash: “Imagine somebody from Disney coming up with an idea.”