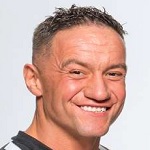 Former WWE NXT referee Drake Wuertz (fka Drake Younger) took to Instagram this afternoon and revealed a text message he received from WWE Talent Relations head John Laurinaitis a few weeks before he was fired, in regards to wearing masks and the COVID-19 vaccine.

The screenshot says “Thursday” as the date of the text message, but it’s likely that Drake received the message around the time WWE Hall of Famer Jerry Lawler received a similar message. Lawler tweeted in late May about how he had received a message a few weeks before, in regards to WWE’s COVID-19 and vaccination policy. You can click here to read those comments from Lawler. Wuertz was released back on May 19, along with other cuts from NXT.

The text message from Laurinaitis to employees reads like this:

Shortly before revealing the text message on WWE’s COVID-19 vaccine and mask policy, Wuertz took to his main Instagram feed and issued a statement. Wuertz noted that he questioned and pushed back at vaccine requirements, and was punished as that didn’t fit the narrative, he said. Wuertz went on to say that he lost his six-figure job for “taking a stand on multiple fronts,” but he doesn’t regret that at all. He accused WWE of violating basic human rights, and bowing to a “communist mob agenda.” The full statement can be seen below:

“Any company that is discriminating against employees that refuse to participate in an experimental medical procedure by forcing them to show proof of vaccination in order to come to work in a normal capacity is violating basic human rights. I questioned, pushed back, and then defied this tyrannical overreach of control. That didn’t fit their narrative and I was punished. Faith is taking a stand and knowing that God has you covered. I lost my six-figure job for taking a stand on multiple fronts and I don’t regret it one bit. We all come to a point where we either follow the Lord or follow the world. That decision was easy for me. I’d rather flip burgers for the glory of God then sell my soul being part of a cabal that’s pushing a deceptive lie that you must mask up or take the jab in order to participate in normal everyday life. A company I thought was Patriotic has now bowed to the communist mob agenda. #ReligiousFreedom #Uncanceled #RiseUp #DefyTyrants #medicalfreedom #bestrongandcourageous #GlorytoGod”

Drake continues to make charity and political-related appearances in the Florida area, and is resuming his in-ring career now that he is no longer working as a referee for WWE. You can see his related posts below, along with a post he made after speaking at the Republican National Hispanic Assembly in Seminole County, FL on Monday night, plus photos/comments from his in-ring return for the Pro Wrestling 2.0 promotion this past weekend at a show they put on to coincide with the Bikers Against Trafficking organization.