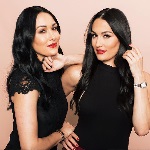 In an interview with ET Online, The Bella Twins said that they are hoping for their reality show Total Bellas to end sooner rather than later. Here are highlights:

Brie on the decision being left to their families: “Birdie doesn’t even let me take pictures…So I’m very respectful of her space, what she wants. I only let her film if she wants to walk into a scene. Both Nicole and I always say, we have to respect our families and at any time where our families feel like it’s time for them to be done, then we have to think about that too. So we feel like we might have a little bit in us, but we also have to really just fill it out with our families.”

Nikki on how much longer they want to do the reality show: “I can maybe do a few more seasons of reality TV, but I just can’t raise my son in front of the cameras. I just don’t want him one day to look at me and be like, ‘You never gave me that choice. You put my life out there and you didn’t let me have the say, choose that,’ and I don’t want that. I want him to have a normal upbringing and when he’s 18 he can choose whatever it is he wants to do, or even younger than that. But I’m very protective of my son. So that’s why I think, for me, it’ll be definitely sooner than later because even when we were filming stuff in the hospital with our cameras. Even when they’re doing his first bath, I was like, ‘Artem, no, like, we don’t need to get this.’ Though I could tell those moments for me, I want to live them through my eyes and not through the screen. So I just, I could feel that it’ll definitely be sooner than later.”