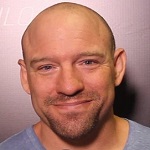 As noted earlier, Smith received significant praise from fans on social media for how his first night on the job went. Smith called RAW with Corey Graves and Byron Saxton, as Adnan Virk’s replacement. Virk lasted less than two months on the job before leaving the company.

In an update, word from WWE production workers is that they were “absolutely thrilled” with Smith’s performance on Monday night, according to @Wrestlevotes. It was noted that Smith was a “natural fit” for the job, and that he put on a “tremendous” performance.

The general consensus among fans online seems to be that Smith hit a home run last night, and seemed more comfortable at the announce table, and more familiar with the product, than Virk was.

Stay tuned for more on Smith. For those who missed it, you can see his post-RAW tweets below:

Had a blast at #WWERaw tonight! Amazing match between @DMcIntyreWWE and @TrueKofi! Tried my best to give it the energy it deserved

I have been a part of a LOT of big sports productions. I’ve never seen ANYTHING that compares to the setup at Thunderdome. Truly impressive