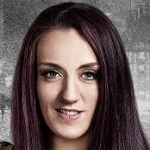 WWE NXT UK Superstar Meiko Satomura is making a permanent move from Japan to England. Satomura signed with WWE in October 2020 to work as a coach and performer for NXT UK. She had been living in a London hotel at one point, dealing with the COVID-19 pandemic, but she told Tokyo Sports in a new interview that she will be moving to the UK at the end of June.

Satomura noted that if she doesn’t move, she won’t be recognized by the UK fans. She said she won’t come back to Japan for 6 months at the earliest, more than a year at the longest. She said she’s moving to the UK to focus on the NXT UK Women’s Title, currently held by Kay Lee Ray.

On a related note, the rematch between Satomura and KLR is now official for next month.

WWE has announced that Satomura will get another shot at KLR’s NXT UK Women’s Title in two weeks, on the June 10 NXT UK episode.

Satomura won a Gauntlet Match earlier this month to become the new #1 contender. The match also featured Emilia McKenzie, Isla Dawn, Jinny, and Dani Luna. After that match, KLR attacked Satomura and laid her out. This week’s NXT UK show featured a video package to hype the rematch, where KLR declared that sh eis the “Forever Champion” of WWE.

KLR retained her title over Satomura back on the March 4 episode, in Satomura’s second match for the brand. She had defeated Dawn in her debut a few weeks before that. Since then Satomura has won all of her bouts – a March 18 win over Luna, a tag team win with McKenzie over Dawn and KLR at Prelude on April 8, a win over Aoife Valkyrie on April 29, and the Gauntlet on May 13.

KLR has held the NXT UK Women’s Title for 636 days as of today. She became the third champion in history by defeating Toni Storm back at the “Takeover: Blackpool” event on January 12, 2019. Since then she has had successful TV and live event title defenses over Storm, Taynara Conti, Piper Niven, and Jinny, including multiple title matches over Storm and Niven.

Satomura tweeted on the upcoming title match and wrote, “Nothing lasts forever. I have to break the dominance of kayleeRay! Be prepared!! #NXTUK #WWE #WWENXT”

KLR added, “2 weeks, Round 2 for the @NXTUK women’s championship Another trophy for the mantle [trophy emoji] #FOREVERCHAMPION”

Below are highlights from this week’s NXT UK show, which featured Teoman vs. Ashton Smith, Nathan Frazer vs. Sha Samuels, a new look Kenny Williams vs. debuting veteran talent Andy Wild, plus Trent Seven vs. Sam Gradwell in the main event. Also below are tweets from KLR and Satomura.

Nothing lasts forever.
I have to break the dominance of kayleeRay!

Round 2 for the @NXTUK women's championship

“The Final Boss” @satomurameiko has promised to take away the #NXTUK Women’s Championship from @Kay_Lee_Ray. pic.twitter.com/SQasZKS3oD