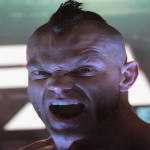 AEW star Brian Cage has joined the cast of the “Jasper” horror movie.

Producer Shaun Cairo (Pitchfork) sent word that the FTW Champion will play the role of a character named “Hammer” in the movie.

Written by award-winning writer-director Keith Vaile, “Jasper” tells the story of a young woman (Erin O’Brien) and her friends as they are stalked by a vicious serial killer who disposes of bodies using the hogs on his small southwestern farm.

The tagline for the film is, “The Hunt for the World’s Most Vicious Serial Killer has just begun.”

The film was shot in Egg Harbor, NJ and Mays Landing, NJ, according to IMDB.

“Jasper” is scheduled to be released in theaters nationwide on Friday, February 25, 2022 by Unmanned Media and KHV Films Inc. Cairo, Vaile and Judy Fox will are producers for the movie.

Cage will be in action at Sunday’s AEW Double Or Nothing pay-per-view as he faces “Hangman” Adam Page in singles action.