WWE Ambassador Dana Warrior says she was not involved in the Dark Side of the Ring episode on her husband, WWE Hall of Famer The Ultimate Warrior, which will premiere this coming Thursday on Vice TV.

The A&E Biography documentary, which was also produced by WWE Studios, premiered last night and Dana plugged the episode on Instagram. A fan asked her if she approved the Dark Side of the Ring on her husband.

“i had no part in this project. Smut and filth does not rise to my note,” she wrote.

Warrior’s ex-wife Shari Tyree was interviewed for the Dark Side of the Ring episode.

In a meteoric rise to fame, Jim Hellwig aka The Ultimate Warrior morphed himself from an aspiring chiropractor into one of wrestling's most iconic and polarizing figures, leaving a complicated legacy in his wake.

“I don’t think people knew how excited he was about his Wrestling Buddy. It made him feel like he had arrived.” —Shari Tyree, Ultimate Warrior’s ex-wife.

Roommates Jim Hellwig aka The Ulitmate Warrior, and @Sting at the very start of their wrestling career circa 1985. 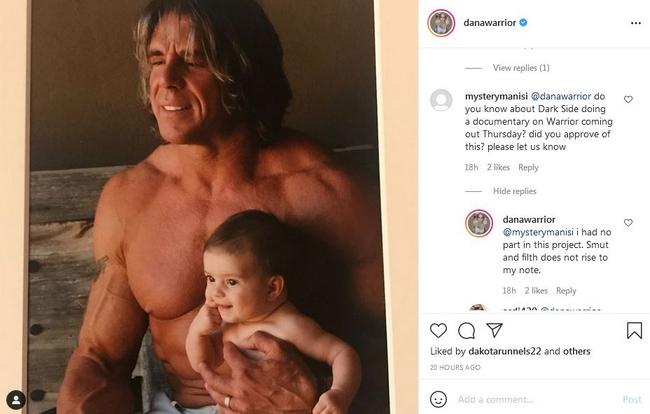