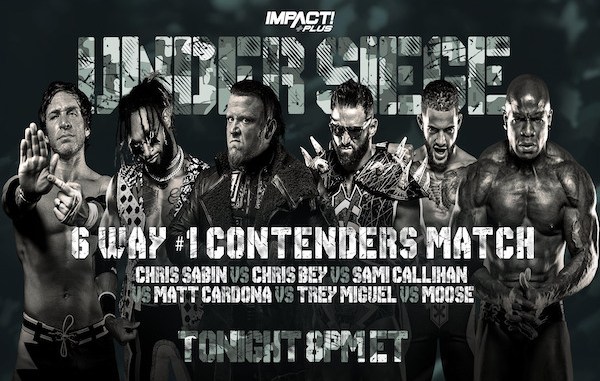 -The intro video focused on Kenny Omega, the competitors in the six-way match, and tonight’s six-man match.

Taurus used his strength to get the initial advantage. Taurus followed with a backbreaker on Myers. They traded the advantage and Myers bailed to the floor. Myers punched Steve on the outside, then caught Taurus with punches and kicks. Back in the ring, Myers went to work on Taurus. Taurus made a comeback after swiftly climbing the ropes and hitting a twisting crossbody block. Taurus got a two count after a crucifix bomb.

Rosemary and Steve shouted encouragement at ringside. Taurus got a near fall after a shoulder breaker. Myers hit a flatliner for a two count. After fighting on the top rope, Myers got a thumb in Taurus’ eye then went for his running clothesline and got the pin.

-D’Lo and Striker appeared on camera then ran down the rest of the matches for the show.

Taylor won a test of strength over Susan and took her to the mat. Taylor hit a 619-style move on Susan. All four wrestlers fought in the ring, with Tenille and Taylor getting the best of the action. Tenille got a neckbreaker on Lee over the ropes. Susan pulled Tenille off the ring apron. Lee floored Tenille with kicks and got a two count. Susan tagged in and mocked Tenille. Taylor tagged in and got offense on Susan. Taylor got a fisherman suplex on Susan. Lee broke up the pin attempt.

Susan and Taylor battled on the top rope. Tenille accidentally knocked Taylor off the top rope. Susan superplexed Taylor. Taylor small packaged Susan, but Lee broke it up. Tenille hit Susan with a shoe and Taylor hit a suplex on Susan for the pin. Taylor reluctantly posed for pictures with Tenille. Taylor left the ring as Tenille and Kaleb celebrated.

-Sami Callihan promo. He doesn’t have to care if he has to go through the entire Impact locker room, but he will meet Kenny Omega to regain the Impact title.

This match was to determine a number one contender for the Impact Tag Team Titles. All the wrestlers brawled at the bell. Larry and Fulton went at it. Acey tagged in and brawled with Fulton. Rohit tagged in and punched Acey. Acey slapped Rohit hard. Petey tagged in and tripped Rohit. Petey followed with a dropkick. Petey stood on Rohit’s groin in the corner then super kicked him. TJP and Petey double teamed Rohit.

TJP had Rohit in a submission on the mat. Petey and Rohit battled back and forth. Shera tagged in and overpowered Petey. TJP got the hot tag and hit an offensive flurry on Rohit. TJP did the bootwash on Rohit in the corner. Shera clotheslined TJP and delivered punches and kicks. Rohit tagged back in and took it to TJP. Austin made a blind tag and took over on TJP. Fulton tagged in and went on the attack on TJP.

Austin tagged back in and kept the advantage over TJP. TJP made a comeback and got a tornado DDT on Austin. TJP made a tag to Petey. Petey ran wild on Austin. Fulton ran in to break up a Canadian Destroyer attempt. XXL double teamed Austin. The match broke down and wrestlers traded moves. Rohit knocked TJP off the top rope. Rohit DDT’d Austin. Rohit hit the jumping knee on Austin. Larry D head butted Rohit. XXXL squashed Rohit.

-Gia Miller interviewed Fire N Flava backstage. Kiera Hogan said that the “babies” (the titles) were coming back home. Tasha Steelz said they would drag Jordynne Grace and Rachael Ellering by their edges and win the titles back.

Mack attacked Morrissey at the bell and sent Morrissey reeling. Morrissey came back with a shoulder tackle to knock Mack down. Mack battled back with punches and forearms. Morrissey bailed to the floor. Mack followed him and fought on the floor. Morrissey got the best of the action on the floor. Back in the ring, Morrissey took control with a chin lock. Morrissey stayed in control of the match and had Mack down on the mat.

Morrissey dropped elbows on Mack. Morrissey choked Mack over the ropes, then returned to the chin lock. Mack powered out, then made a comeback with a series of moves, including a big clothesline off the top rope. Morrissey caught Mack and hit a Bossman Slam. Morrissey followed with a kick to the back of Mack’s head and got the pin.

Morrissey punched Mack several times after the match. Morrissey grabbed a chair from ringside and was going to go after Mack again. Rich Swann’s music hit and he took the fight to Morrissey. Morrissey missed a charge and flew over the top rope. Swann took the chair and challenged Morrissey to come back in the ring.

Kiera hit her sliding dropkick on Ellering. Kiera had Ellering in a chin lock. Ellering made a comeback and got the hot tag to Grace. Grace ran wild on Tasha. Ellering and Grace double teamed Tasha. Kiera broke up a pin attempt. Grace hit a spinebuster on Tasha. All four wrestlers fought and exchanged moves. Tasha and Grace battled in the ring. Kiera hit a Sliced Bread on Ellering on the floor. Grace hit a palm strike on Tasha. Grace and Tasha fought on the top rope. Tasha hit a frog splash on Grace for the pin.

-Swinger’s Palace segment. XXXL walked in. Swinger said he hoped they had better luck at the table than they had earlier tonight in the ring. Swinger wanted to throw them out after Larry insulted Swinger by saying that Simon Diamond carried their team. Hernandez threw XXXL out. Swinger called them the Natural Disasters.

Alexander got the initial upper hand. ELP took Alexander down and had him in the bow and arrow briefly. ELP changed the momentum and got a front face lock. Alexander got a powerslam and followed with a chop. ELP escaped to the outside and was followed by Alexander. Back in the ring, ELP took control, but Alexander came right back with a backbreaker. ELP stomped Alexander’s foot to turn the tide. ELP chopped Alexander and choked him.

ELP did some fancy footwork on the top rope and took Alexander down. They traded chops in the corner. ELP hung up Alexander in the ropes, then climbed up and stood on his crotch. ELP mockingly chanted “One more time!” Alexander suplexed ELP, who rolled out of the ring. Alexander accidentally chopped the ring post. ELP rolled Alexander back in. ELP dropped knees on Alexander’s hand, then worked on his fingers.

Havok laughed at Deonna at the start, then went on the attack. Havok missed a leg drop. Deonna took Havok down. Deonna worked on Havok’s arm. Havok tried to make a comeback, but Deonna went back to the arm. Havok punched Deonna in the corner. Deonna sidestepped a charge from Havok. Havok knocked Deonna down with a clothesline. Havok missed two stomps then got caught with an elbow. Havok put Deonna in a Boston Crab.

Havok splashed Deonna in the corner. Havok knocked Lee and Susan off the apron. Deonna caught Havok in an armbar. Havok connected with a knee to Deonna’s face. Deonna came back with a kick, a “Divorce Court” from the ropes, followed by an armbar for the tap.

-Recap video of the Omega/Good Brothers vs. Finjuice/Eddie Edwards feud.

Don Callis came out to introduce Omega. Omega came out with the three belts. Team Omega took the early advantage but Finjuice and Edwards made a comeback. Juice took control over Omega. Omega got the advantage back by attacking Juice on the floor then rolled Juice back in. Omega and Anderson took control over Juice. Finlay made the hot tag and took over on Omega and Anderson. Finlay knocked Doc off the apron.

The match broke down and everyone started fighting. Omega held Finlay’s leg from the outside to cause the distraction. Anderson took the advantage over Finlay, then tagged out to Doc. Doc put Finlay in a chinlock. Eddie finally made the hot tag and went wild on Omega. Omega hit a rana on Eddie. The Good Brothers knocked Finjuice off the apron. Eddie fought 3 on 1 until Finjuice rejoined the fight. Eddie hit a Blue Thunder Bomb on Omega for a two count. Juice teed off with punches on Doc. Omega hit a V-Trigger on Juice.

WINNERS: Eddie Edwards and Finjuice in 20:00.

-Finjuice and Eddie celebrated in the ring as Team Omega walked up the ramp angry.

-D’Lo and Striker appeared on camera to set up the next match.

(9) SAMI CALLIHAN vs. CHRIS BEY vs. MATT CARDONA vs. TREY MIGUEL vs. CHRIS SABIN vs. MOOSE

This match was to decide a number one contender for Kenny Omega’s Impact World Title. All six wrestlers stood in the ring at the start and fought. Moose caught Trey with an overhead suplex. Sabin super kicked Moose, who no-sold it. Bey and Sabin hit a double superkick to take out Moose. Sabin and Bey went at it. Trey cleared the ring, then he and Sami battled. Cardona sidestepped Moose and sent him sailing over the top rope. Cardona dove on Moose to the outside.

Sami broke up a pin attempt by using a chair. Sami set up the chair in the ring. Sami suplexed Bey on the chair. Cardona and Sami fought. Sabin hit a DDT/flatliner on Cardona and Sami. Sami was about to go for a piledriver on Cardona. The Good Brothers ran down and took out Sami and left him laying outside the ring. The Good Brothers left. Sabin hit a Cradle Shock on Cardona for a two count. Sabin hit a dive to the outside on Moose. Sabin got a two count on Moose. Moose went after Sabin’s knee. Moose hit a spear on Sabin for the win.

WINNER: Moose in 11:00 to become the new number one contender for the Impact World Title.