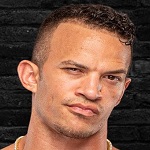 Starks reportedly suffered the fractured neck during the April 21 Dynamite loss to Hangman Page, according to Voices of Wrestling. The injury reportedly occurred when Starks landed on his head from a release German suplex.

Starks is expected to miss around 3 months of in-ring action, but is also expected to continue to appear on AEW TV in some capacity. Doctors reportedly believe that Starks’ neck will heal without needing surgery.

Starks has not commented on the injury but he did tweet what appears to be an x-ray photo earlier today, as seen below. He also told a fan back on April 21 that he was “good” following the match with Page. He made a follow-up tweet after that match and thanked DDP Yoga for his flexibility.

Stay tuned for more on Starks’ AEW status. You can see the related tweets below:

I’m good! Thank you @DDPYoga for my flexibility