WWE to add another team to Tag Team Turmoil at WrestleMania 37?

It looks like Carmella and Billie Kay will be booked for WrestleMania 37.

As we’ve noted, there’s been speculation on Carmella and Billie being added to the four-team Tag Team Turmoil #1 Contender’s Match on Night One of WrestleMania 37, due to a backstage segment on last Friday’s SmackDown on FOX show. WWE announced four teams for the match on tonight’s RAW, and revealed that the winners will go on to Night Two to challenge WWE Women’s Tag Team Champions Nia Jax and Shayna Baszler. The teams announced on RAW were Lana and Naomi, Liv Morgan and Ruby Riott, Natalya and Tamina Snuka, plus Dana Brooke and Mandy Rose.

There’s no word yet on when the fifth team will be officially announced for Tag Team Turmoil, but it’s likely to come during Friday’s special WrestleMania edition of SmackDown on FOX, the final go-home show for WrestleMania 37.

Bayley still has no announced WrestleMania 37 match. Fans are now speculating that Bayley could end up taking Billie’s spot in some sort of angle, making the fifth team Carmella and Bayley. This speculation is fueled by Carmella’s recent comments on WWE’s The Bump, about wanting to team with Bayley or Billie.

WrestleMania 37 takes place this Saturday, April 10 and Sunday, April 11 from Raymond James Stadium in Tampa, Florida. Below is the updated card for the big event, along with a copy of the deleted Tag Team Turmoil match: 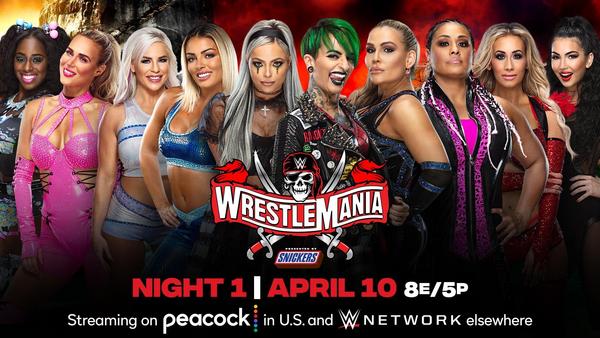 #1 Contender’s Tag Team Turmoil Match
Carmella and Billie Kay (to be announced) vs. Lana and Naomi vs. Tamina Snuka and Natalya vs. Liv Morgan and Ruby Riott vs. Mandy Rose and Dana Brooke
Winners advance to title match on Night Two.

The Miz and John Morrison vs. Bad Bunny and Damian Priest

Nigerian Drum Match (Anything Goes, No Rules or Limits) for the WWE Intercontinental Title
Apollo Crews vs. Big E (c)

Randy Orton vs. “The Fiend” Bray Wyatt with Alexa Bliss