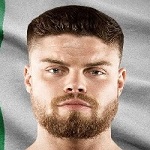 WWE NXT UK Superstar Jordan Devlin made his return to the main NXT brand on tonight’s show, and he brought his NXT Cruiserweight Title with him.

Tonight’s show saw Devlin confront NXT Cruiserweight Champion Santos Escobar after Raul Mendoza and Joaquin Wilde defeated Breezango while Escobar watched from ringside. Devlin told Escobar to watch and see what a real champion looks like, warning him that The Ace is back in town and that he can put his “little replica title” in the trash can because the guy he was filling in for is back.

Escobar responded and said he has re-defined what it means to be a cruiserweight, and that Devlin is just history now. This back & forth led to Escobar telling Devlin to wrap up his business in the UK and then come back to face him at the two-night “Takeover: Stand and Deliver” event during WrestleMania 37 Week, so they can settle this once and for all. They faced off until Devlin delivered a headbutt and then dropped Escobar on his head, retreating to the ramp with his title while Escobar bled from his mouth in the ring.

Devlin is set to defend his title against Trent Seven on tomorrow’ s NXT UK episode on the WWE Network. That match has already been taped. It’s likely that Devlin will be back on next Wednesday’s NXT show to continue the feud with Escobar, and WWE should confirm their Takeover match then.

Triple H tweeted after the showdown between Devlin and Escobar and wrote, “2 claims over 1 title … the best Cruiserweight on the planet. @Jordan_Devlin1 @EscobarWWE #WWENXT #NXTUK”

Stay tuned for more on Devlin vs. Escobar. Below is video from tonight’s segment, along with Triple H’s tweet: