Redditor XxSpruce_MoosexX revealed in a new post that he recently found a rare item at a local thrift store – the custom suit jacket worn by WWE Chairman & CEO Vince McMahon on the April 24, 2020 SmackDown episode, which was the Triple H 25th Anniversary Celebration show.

Moose noted that he bought the coat for just $45 at a thrift store in Florida.

McMahon originally bought the custom jacket from Richard’s of Greenwich, a luxury men’s & women’s clothing store in Greenwich, Connecticut. The inner tag notes that the jacket was made by Italian luxury fashion house Ermenegildo Zegna, also known as Zegna, “exclusively for VKM,” which are Vince’s initials.

Another tag lists the date of February 4, 2019, which looks to be when the jacket was made. “VKM Vince McMahon” is also listed under the date, along with Richard’s of Greenwich.

The Redditor noted that he also recently paid $45 for a suit owned by comedian and TV host Steve Harvey, joking that it was “much cheaper quality” than Vince’s. The fan also commented on how “jacked” Vince is based on the sizes of the jacket and his own build.

Below is video of Vince wearing the suit on SmackDown, along with a photo collage from the Redditor: 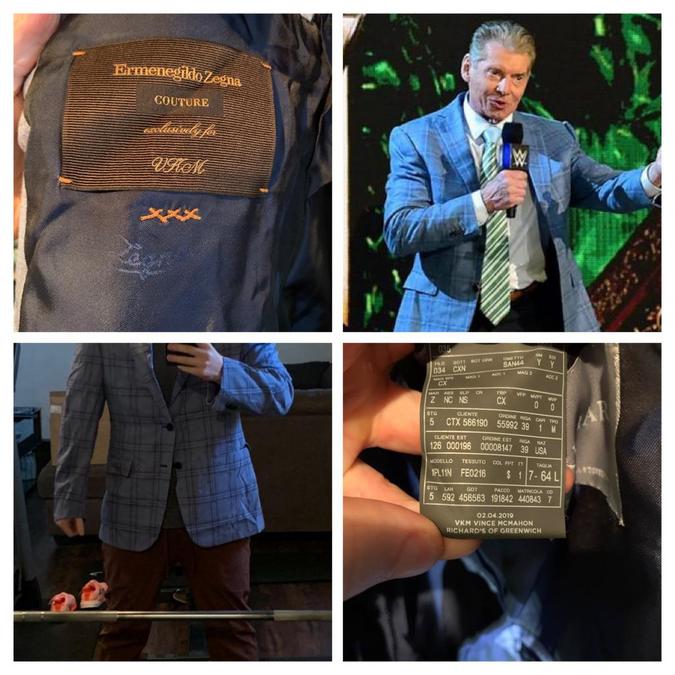