Kayla Braxton deletes Twitter after apparently coming out as bi-sexual

WWE on-air talent Kayla Braxton took to Twitter last night and announced that she is bi-sexual.

Kayla said she’s “over having to choose” her ethnicity and her sexual orientation.

“My whole life, I’ve had to choose. Are you black? Are you white? Which bubble do you fill in on the SATs? I always filled in “other” because nothing applied to me. Tonight, I choose to be over having to choose. Hello world. I’m Kayla. Oh. And yeah – I’m Bi. [sunglasses emoji],” she wrote.

Kayla’s announcement received positive reactions from fans and wrestlers, including Lance Storm and WWE Hall of Famer Beth Phoenix, but she was also met with some negative feedback.

There was some speculation that Braxton wasn’t posting about her sexual orientation, but about being bi-racial, and that could be why she deactivated her account. That apparently is not the case as she tweeted out the bi-sexual pride flag shortly before she posted the comments mentioned above.

Patients attended by cardiologists started to feel much better. That when the research on the potency enhancement started as described at Domain.com, which followed by the development of the medication.

This isn’t the first or second time Braxton has deactivated her Twitter account in the last few years, so it’s likely she will be back soon. She remains on Instagram at @kaylabraxtonwwe.

You can see screenshots of Kayla’s tweets below: 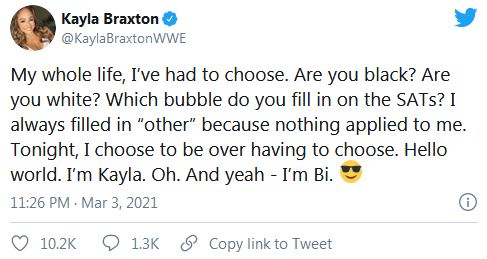 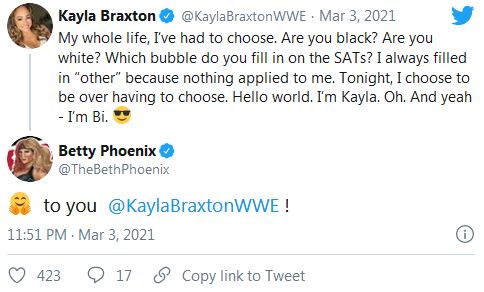 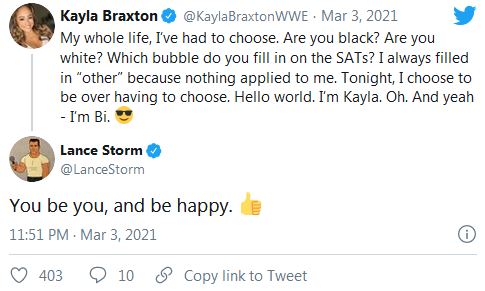