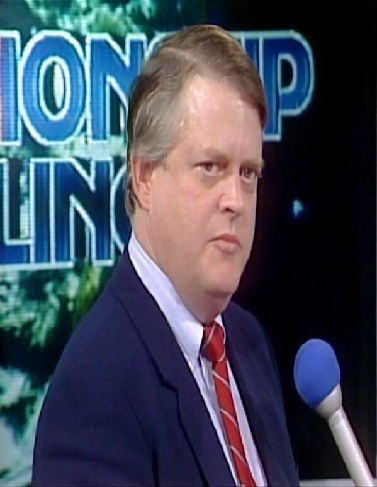 – Crockett Jr. was part owner and owner of the legendary Jim Crockett Promotions from 1977 to 1989. The company in which ran affiliated with the NWA, was started by his father and was sold in 1988 to Ted Turner, who would rename it WCW. Crockett was a three-term NWA President. His last role being in 1991.
– Crockett Promotions also owned the minor league baseball team Charlotte Orioles and the Southern Hockey League team Winston-Salem Polar Twins from 1974 to 1975.
– Upon trying an internet broadcast network in 1994 called World Wrestling Network, Crockett would retire from wrestling. After retiring Crockett worked as a Texas realtor & mortgage loan originator.
– March 3, 2021, Crockett had passed away due to complications of liver & kidney failure.
– On March 5, 2022, Crockett was voted into the GERWECK.NET Hall of Fame.