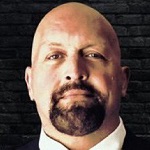 AEW is set to debut new merchandise for Paul Wight (fka Big Show) at tonight’s Dynamite taping from Daily’s Place in Jacksonville, the first the company has released for the pro wrestling legend.

Wight will make his official Dynamite debut on tonight’s show to address the fans. As seen below, his first official t-shirt is a play off his Big Show ring name in WWE as it says, “No More BS” across the chest.

Wight will eventually wrestle for AEW and will be serving as a color commentator on the new AEW “Dark: Elevation” show on YouTube, with Tony Schiavone. That show premieres on Monday, March 15.

AEW announced last month that Wight has signed a multi-year contract with the company. You can click here for backstage details on why he left WWE.

Stay tuned for more on Wight in AEW. Below is the photo of his new t-shirt that is being debuted tonight: