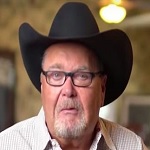 It looks like McIntyre has tweeted a response to JR’s blunder as he posted a photo of himself with the title and wrote, “The WWE World Champion, Drew McIntyre is not impressed or amused.”

JR also explained the botch and blamed it on live television.

Omega has not responded to the blunder as of this writing.

You can hear JR’s slip-up below, along with the related tweets: