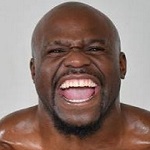 WWE SmackDown Superstar Apollo Crews recently spoke with Stuart Osborne of Dayton247now.com and said he’s currently focused on being a champion in WWE.

Crews is a former WWE United States Champion and has been feuding with WWE Intercontinental Champion Big E. He said earning another title is front & center in his mind right now.

“Having gold for me, it’s definitely something I look forward to,” Crews said. “You get a taste of it and you want more and more.”