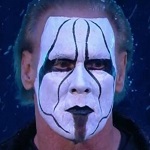 Sting’s AEW in-ring debut will likely be a cinematic match.

As noted before, AEW announced this week that Sting will make his in-ring debut at the Revolution pay-per-view as he teams with TNT Champion Darby Allin to go up against Brian Cage and Ricky Starks in a Street Fight. The Wrestling Observer Newsletter now reports that the Street Fight will likely be cinematic-style.

A cinematic match would make it to where AEW can protect the 61 year old Sting, who has a bad neck with spinal stenosis.

AEW Revolution is currently scheduled for Saturday, February 27. However, there is talk of moving the pay-per-view to Saturday, March 6 or Sunday, March 7. The next boxing pay-per-view with YouTube star Jake Paul has been discussed for February 27, but there are signs that the event won’t be happening as nothing is official yet. Full Gear 2009 drew the lowest number of pay-per-views for AEW as it went head-to-head with the boxing event with the second match between YouTube stars Logan Paul and KSI.

Below is the current Revolution card: