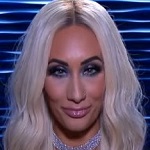 It looks like Carmella will get her WWE SmackDown Women’s Title shot from Sasha Banks soon, but with a twist.

Tonight’s SmackDown on FOX featured a segment where Banks tried to attack Carmella backstage, but Carmella’s sommelier, Reginald, got in the way to make the save. Banks then agreed to give Carmella a title shot, but only if she can have a match with Reginald first.

WWE has not announced Banks vs. Reginald and Carmella vs. Banks as of this writing, but Carmella indicated that she will agree to the terms. There’s no word yet on when the matches might take place, but they could be held off until the WWE Royal Rumble pay-per-view on January 31.

Carmella defeated Banks by DQ, with the title on the line, back on the December 11 SmackDown show. Banks then retained over Carmella by submission at the WWE TLC pay-per-view. The feud has continued since then.

Stay tuned for more on the Carmella vs. Banks feud. Below is video from tonight’s segment: