Brodie Lee’s wife Amanda Huber took to her Instagram Story last night and posted a statement asking fans to stop trying to create a divide in pro wrestling, mainly between WWE and AEW it seems.

Huber’s statement comes after WWE released their second Superstars tribute video to the former Luke Harper (Jon Huber) on Monday. While WWE opened all shows with a graphic in memory of Lee last week, they have released two videos of Superstars paying tribute to the former Bludgeon Brother. AEW changed last week’s Dynamite show to a Celebration of Life tribute show for the leader of The Dark Order.

Huber’s post included a photo of WWE Intercontinental Champion Big E, taken from the tribute video WWE put out. Big E was close with her husband. She talked about why her husband left WWE, but also about what WWE gave him.

“In my husbands final moments, the people that surrounded my family were wrestlers. Companies didn’t matter. Please, I beg you. Stop trying to create a divide in wrestling. Support pro wrestling. Love pro wrestling. Live your life like Brodie. In a way that people speak like this,” she wrote, attaching the photo of Big E from the tribute video.

You can see Amanda’s full statement below:

“So many people expect myself and my family to hate on @WWE. The fact is, we don’t. We never have.

My husband absolutely got frustrated because he wanted more than they had envisioned for him. That didn’t mean he hated them. The frustration didn’t change the real & genuine love that our family has for pro wrestling.

WWE gave my husband a platform. It enabled him to live his dream. A dream he *almost* gave up on. He was able to travel the world, in his dream job. He got to entertain millions of people. He got to build a beautiful life for our family. He held singles gold there. He won a belt at WrestleMania! He ticked so many “Dream Life” boxes there. He just happened to want a little more out of his career. That’s why he left. Not out of hate. Not because they’re an evil company. He left because his vision didn’t match theirs.

The most incredible thing he took away from his time in WWE was the people. The people he carried with him until his very last days. It wasn’t one company vs another. Little Brodie loves wrestling. We still watch wrestling every week. We would tune in to see “Uncle Boom-Boom” @WWECesaro and family best friend @WWEBigE people that transcended the lines of friendship into family. People in the WWE watched my kids grow up. They loved my husband so much they welcomed my family into their arms. They became my family too. The flood of love I’ve received from the WWE is real and it’s beautiful.

In my husbands final moments, the people that surrounded my family were wrestlers. Companies didn’t matter. 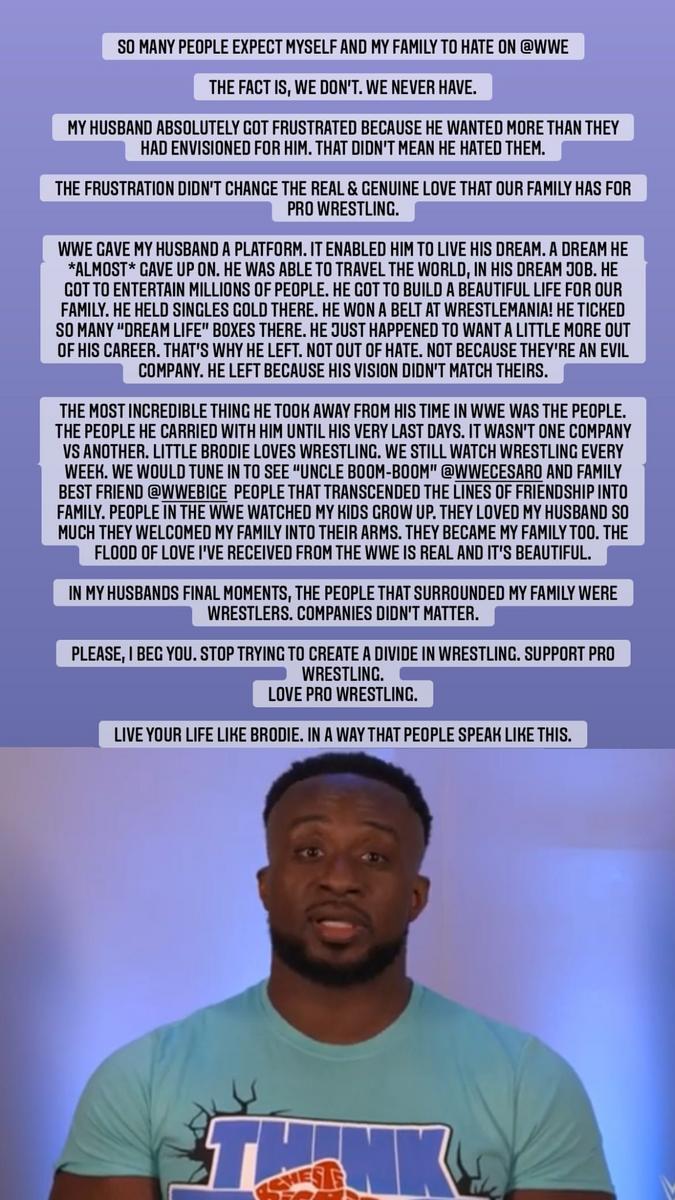