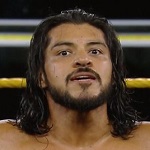 Metalik vs. Escobar was announced after Metalik and Lince Dorado of Lucha House Party came to NXT on tonight’s final episode of 2020. They interrupted an in-ring promo by Legado del Fantasma, which led to Dorado and Metalik defeating Joaquin Wilde and Gran Metalik in tag team action. After the match, Metalik taunted Escobar while motioning around his waist for the title.

The New Year’s Evil special edition of NXT will air next Wednesday night on the USA Network, taking place live from the Capitol Wrestling Center at the WWE Performance Center in Orlando, FL. Below is the latest promo for the episode, along with the updated card and photos of host Dexter Lumis with his match drawings from tonight’s go-home show:

Xia Li and Boa return from their transformation

And, finally, last but most certainly not least…