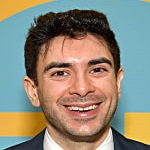 Tonight’s Year In Review Part 1 edition of Impact featured another “paid for by AEW” advertisement with Khan and Schiavone. Schiavone introduced his boss as the only pro wrestling owner that’s not a carny.

Khan wished a Merry Christmas to Impact fans and mentioned that they were in Nashville, where he’s partner of Activist Artist Management, which represents big stars and musicians in town, and part owner of the Virgin Hotel in Nashville. Khan then brought up the Impact Hard To Kill pay-per-view main event for January 16, featuring AEW World Champion Kenny Omega and Impact World Tag Team Champions The Good Brothers vs. Impact World Champion Rich Swann and The Motor City Machine Guns.

Khan also invited Impact to send any of their wrestlers to this week’s AEW Dynamite.

“I just heard that Impact Wrestling is hard to kill and I’ve heard that Impact Wrestling is looking to feature AEW World Champion Kenny Omega in a six-man tag on a pay-per-view called Hard To Kill,” Khan said. “Kenny Omega, the AEW World Champion wrestling on someone else’s pay-per-view. I certainly have the power to stop that, Tony. I could file an injunction, there’s a lot of things I could do.

“If I didn’t want the match to happen, it wouldn’t be happening. You know what, Impact Wrestling, you want Kenny Omega here wrestling your people, that’s fine with me. Tomorrow night, Wednesday Night Dynamite, you’re welcome to send some of your people to my show this week, any week.”

Schiavone then plugged tomorrow’ Holiday Bash edition of Dynamite on TNT, which will air at a special start time after the NBA game ends. He also ran down the card for tomorrow night, including the main event between The Acclaimed and AEW World Tag Team Champions The Young Bucks, with the titles on the line.

Khan added, “And I understand you have some tag teams here yourselves, Impact Wrestling. I might go look around and see what they’re up to, see what their contractual status is. You know what, Tone? For a company that’s hard to kill, $7 billion buys a lot of ammunition. So Impact Wrestling, let me tell you something – Kenny Omega, you’re welcome to have him at Hard To Kill. I’ll tune in, I’ll check it out, and I expect to see the AEW World Champion with his hand raised high.”

Tony and Tony ended the promo with a Merry Christmas.

You can see the full promo below: