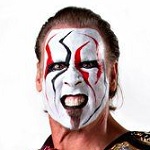 AEW star Sting is featured in a new music video from Islander.

As seen in the video below, Sting is the star of the official music video for Islander’s new “Crazy Crazy World” single.

Mikey Carvajal of the band told ThePRP.com that the WWE Hall of Famer is his favorite wrestler of all-time. He thanked The Stinger for “putting over” the band.

“The visual for this song stars the wrestling legend, Sting,” Carvajal said. “He is my favorite wrestler of all time, and he’s one of the coolest people I’ve ever had the honor to know or work with. In the wrestling business, when you help someone’s career, it’s known as ‘putting someone over.’ So I really can’t thank Sting enough for putting us over. It definitely feels like Islander has finally made it to main event with this track.”

Sting tweeted the following to promote the video: