Sonya Deville took to her Instagram Stories today and made it clear that she loves her fans, but will not hesitate to report them or take legal action if they cross a line.

A disturbed fan named Phillip Thomas II is facing life in prison for the attempted kidnapping of Deville back in August following an incident at her home in Florida. She noted in today’s Instagram message that she does not put all fans into the same category as Thomas, but harassment is never acceptable.

“I’m going to say this once and try and be clear,” Deville wrote. “I love my fans very much and appreciate u despite what has happened I do not categorize u all as raging psycho paths. But harassing myself or people I have been w etc is never acceptable. I share my life with y’all to an extent because it is part of what I do and what I signed up for that being said I will not hesitate to report and or take legal action against anyone that has sent threatening messages and or anything inappropriate to me or someone in my life. Like I mentioned I am not messing around at all and it is a zero tolerance policy at this point due to referenced incident, thank you. [smile emoji]”

It remains to be seen what brought this message on from Deville, if anything recent.

Depositions for the case against Thomas are scheduled to begin on February 3, 2021, and will last until at least March 17. The trial date will likely be scheduled for June at the earliest, and could drag on into the summer.

Deville has been away from the WWE storylines since losing the “No DQ, Loser Leaves WWE” match to Mandy Rose at WWE SummerSlam in late August. She remains under contract to WWE but there’s been no word on when they will bring her back. 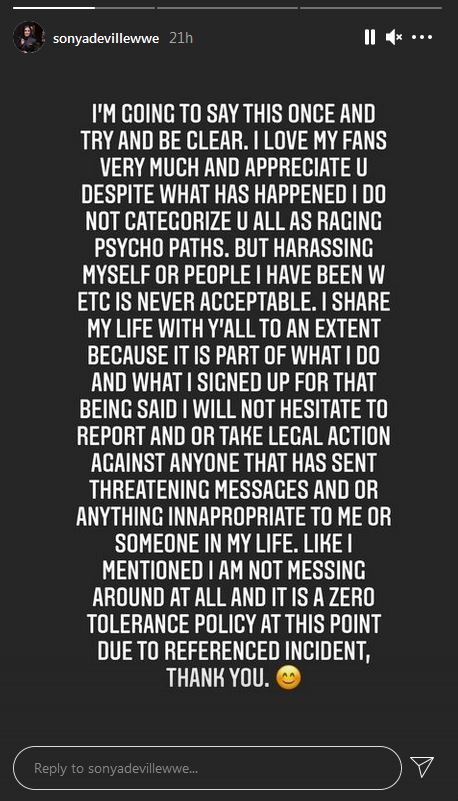