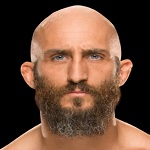 Sunday’s NXT “Takeover: WarGames 2020” event featured a promo from Balor, who warned that all eyes will be back on The Prince beginning tonight. Balor has been out of action with a jaw injury since the recent “Takeover: 31” event.

A “Casualties of WarGames” segment was also announced for tonight’s show. WWE noted that they will take a “special look” at the casualties of the match after The Undisputed Era and Team Candice LeRae won the WarGames matches this past Sunday.

Stay tuned for more on tonight’s NXT show and be sure to join us for live coverage at 8pm ET.