Allison Danger Talks About Growing Up with Steve Corino, Getting her Start with Sandman, and Disrespect for Female Trainers 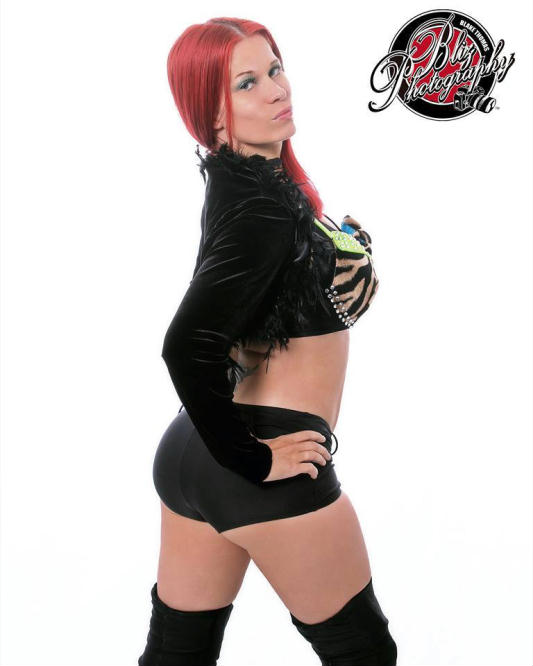 On the latest edition of Talkin’ Sass with on VOC Nation, Sassy Stephie talked to Allison Danger about growing up with Steve Corino, getting into wrestling by accident, and creating her legacy in the business. Here are some highlights:

On growing up with her brother Steve Corino: “For me, growing up I wasn’t a wrestling fan. My older brother Steve (Corino was a) huge wrestling fan. I mean, posters lining the wall, you didn’t need to paint his walls because everything was wrestling. Every TV show he watched (was) wrestling… My parents would get him wrestling toys, but then I’d get Miss Elizabeth; I loved Elizabeth. It was nice to see a woman – I was like, she’s gorgeous, she’s beautiful – so growing up I never really seriously considered it. Steve knew from as long as I’ve known him that he was going to be a wrestler.”

On getting started in wrestling purely by accident: “We’d go to his shows. We’d support him on the independent level because we’re proud; I’m impressed, this is my brother chasing his dream. Eventually he gets signed to ECW (and) I start going to shows with him and hanging out backstage… I met some really cool people. I knew Dawn Marie from ECWA, I met Francine through ECW, I met (Amber) Gertner through ECW… This one time in about May 2000, Francine goes ‘I have to do this show up in Reading (Pennsylvania), you’re on the way up from where I live. Any chance you want to go hang out with me? I don’t want to drive alone.’…we drive up to Reading, which was at the time about 40 minutes from where I lived…(she brings be backstage) and Sandman’s there. He’s like ‘Yo, it’s Corino’s sister. My wife couldn’t come, you gotta be my valet tonight. You know what you’re doing it’s in the genes.’ I’m like, I’m not a wrestler sir, I’m just here with Francine…. To me, me doing that would be stepping on the toes of my brother, he’s putting in all this work and I’m just going to go do this?… I tried calling my brother (and couldn’t) get hold of him… finally everyone (I talked to) goes, ‘it’s gonna be fine this one time.’

On Steve Corino’s reaction to her first show: “He goes, ‘what do you think?’ And I’m like, I loved it. He goes, ‘are you going to do more?’ And I’m like, that depends on you. If you are OK with me doing this, I’d like to pursue it; but if you say (no) this is my thing, I’m gonna say this is a one time thing and I’m going to walk away out of respect for my brother. He looks at me and goes ‘you have to join the school this week. I expect you to be at class, I expect you to do ring crew, don’t think you’re gonna have it easy.’ And I’m like yes sir (and) I started… I wasn’t allowed to be a weekend warrior, if I was going to do it I had to give 100%. 20 years later here I am, still doing rasslin.’

On her aspirations and creating a legacy: “I want this to be my life, for my lifetime. I want to retire from wrestling when I’m in my 50s or 60s. When I’ve done good work and I’ve helped the next generation grow as wrestlers. I want to be that tattooed old grandma still in the ring running around getting things done. That’s what this year was supposed to be (laughs). I am training with some students right now. I have Lacey Ryan, who’s gonna be huge…she’s gonna be a damn star. What she can do physically blows my mind. She just a brick house. All muscle, super strong, very athletic…. This year the plan was to start bringing back seminars…I had some booked around the country but everything’s gotten delayed.”

On men not respecting a female trainer: “Something that’s been told to me over the years when I’ve talked to people about training: Their like, ‘we can’t train with a woman.’ I’m like, why can’t you train with a woman? ‘Well no one is going to listen to you.’ Are you kidding me? This one dude said to me, ‘I’ve got 11 years in the business; what can you teach me?’ I’m like, how many tours of Japan you got?… Have you been outside of the Nevada-Arizona territory?… First thing is: Never tell a woman they have nothing to offer… You’re not going to go anywhere with that attitude… “