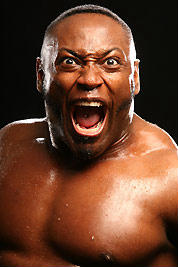 With Impact bringing in several former stars as of late, some fans have suggested they should reach out to Monty Brown. However, a new report suggests that won’t be fruitful. Fightful Select reports that there have been “numerous attempts” to get Brown out of retirement in the last year, but that they have all gone unanswered because Brown has no interest in returning to the ring.

Brown is best known for his TNA run in the early to mid ’00s, which included a run at the TNA World Heavyweight title. He also worked in ECW for the first half of 2007 as Marquis/Marcus Cor Von before exiting the company to take care of his family.

According to Fightful, while Brown has appeared backstage at both WWE and Impact events a couple of times over the past year, he doesn’t have any interest in returning. Fellow WWE alum Kevin Thorn, who has remained close friends with Brown since their days in the company, says Brown jumped at the opportunity to appear at a charity show he did but didn’t want to wrestle. Thorn said that several promoters have contacted him since trying to get Brown’s number, but he’s refused to give it out.