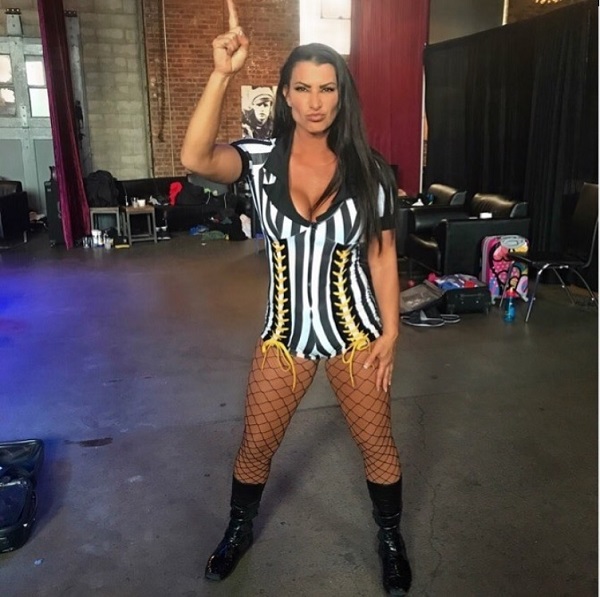 “I didn’t plan on my last match to be that night, I’ll be honest with you. The promoter said, ‘Why didn’t you tell me it was your last match? I would have promoted it like that.’ I said, ‘You know, I decided it 30 minutes before going out.’ For how nervous I get before matches, almost turning 50 and being in a main event of a wrestling show,” Varon said, “not just a female wrestling show—it’s with males. I said, ‘We have to turn it up. I mean we have to do some dangerous stuff. We can’t just do a “ha-ha ga-ga match,’” you know?

“I was so nervous, I was about to puke, this is me every time though—I pace, I sweat, sweaty hands, nervous belly. I was just like, ‘Oh my God.’ I’m exhausted before going out to the match. I [thought], I’m main eventing. I’m getting the championship belt and it’s from a female promoter,” Varon said, “and I can’t go higher than this. I asked the referee out there, ‘Can I have the mic?’ I get the mic and said ‘Thank you guys for all coming to my last match’ and it was like (gasp)—yeah and I decided there. And I felt good about it, I wasn’t sad or anything like that. You know your body. The nervousness comes from I’m older and I don’t want people to see any weakness in my performance. I still want to work just as good as I was back in the day. I wanted to go out with people saying ‘You still got it.’”