Money in The Bank 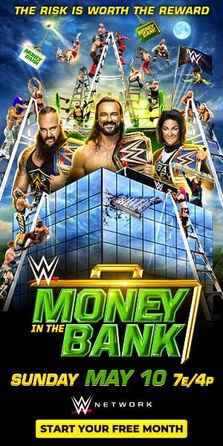 MITB kicks of with a video package and at WWE Global HQ you must face obstacles to get the ultimate reward.

We are welcomed by Michael Cole at WWE Performance Center.

Fatal 4 Way Tag Team Match for WWE SmackDown Tag Team Championship
Challengers: John Morrison and The Miz vs. Challengers: The Forgotten Sons (Steve Cutler and Wesley Blake) w/ Jaxson Ryker vs. Challengers: The Lucha House Party (Gran Metalik and Lince Dorado) Vs Champions: The New Day – Big E and Kofi Kingston
Kofi and Metalik start the match, Kofi with a takedown, Metalik taken down, Kofi with a kick to Lince, Blake tags himself in, Forgotten Sons with a double team,  Morrison tags himself in, Miz tries to intercept but nailed with a boot, Dragon Fly of the top rope onto the rest of the participants on the outside. Metalik with a rollup for a two count. Cutler hits Morrison whilst Ryker hangs Metalik on the rope and  tags himself in, Cutler in control of Metalik, Cutler tags in Blake and double team on Gran Metalik for a two count.
Chin lock by Blake on Metalik. Cutler tagged in and the Sons take New Day down of the apron. Metalik with a tornado DDT, Dorado tagged in and then they take down Miz and Morrison, drop kick by Dorado to Miz, moonsault to Morrison for a two, Dorado with a rollup but broken by Cutler, Morrison with a kick of the second rope to Dorado, Miz tagged in, Kofi tagged himself in and kick to Miz, leg drop to Miz, Trouble In Paradise blocked and tried to turn into Figure 4 but broken and Cutler tags him self in, Kofi remains in control for a two, Big E tagged in and then Cutler tags himself in, Miz tags himself in with a special and then Starship Pain but broken by Gran Metalik, then Dorado Tagged in, Dorado with a Big Splash of the top rope, elbow by Gran Metalik broken by Forgotten Sons. Big E launches Sons to the outside, Jackson low bridges Big E and referee rejects him, Lucha with a double dive of the top rope.  Metalik jumps on top rope but caught by Big E who drops him with a Big Ending for the win to retain the titles.
Winners via Pinfall and still WWE SmackDown Tag Team Champions The New Day – Big E and Kofi Kingston
We see a video package about an interview with Lacey Evans about the Women’s Money in The Bank Ladder Match.
Backstage: Charly Caruso interviews Drew McIntyre about his WWE Championship against Seth Rollins. Drew says I will close his mouth and nail him with a Claymore Kick and break his jaw. We go to Raw Commentators for next match – Tom Phillips, Byron Saxton and Samoa Joe
Singles Match

R-Truth Vs Bobby Lashley
Before the match MVP asks R-Truth what he thinks he is doing, R-Truth says MVP is ballin’. Bobby Lashley music hits and he tells MVP he has this and MVP says this is it, MVP leaves, R-Truth complains and slaps Bobby by accident, bell hits, Lashley with a head to gut of Truth in the corner. Lashley with a spinebuster to R-Truth, Truth tries to gain control and goes for his scissors kick but no luck and then a powerbomb by Lashley for the win.
Winner via Pinfall Bobby Lashley.
We see a video of sports stars supporting funds to help fight those in need due to COVID-19
We see a video package featuring King Corbin about his chances in Money in The Bank match.
Backstage we see Bayley and Sasha Banks heading to the ring, and are stopped by Kayla Braxton and Bayley says she will beat Tamina to retain the title.
Womens Division Singles Match for WWE SmackDown Womens Championship
Challenger: Tamina Vs Champion: Bayley w/Sasha Banks
Bayley slaps Tamina then shoves her against the ropes, Tamina takes down Bayley down easily, Tamina sends Bayley into the corner, Bayley goes for a sleeper hold but Tamina backs her into the corner, Tamina puts Tamina on top rope, Tamina with a kick to Bayley then a scoop slam, Bayley wraps the leg of Tamina in the ring post and then wraps it again. Bayley with kick to back of Tamina, drop kick under the bottom rope to Tamina, Bayley with a pin for a two.
Bayley with kicks to bad leg, Bayley with a elbow drop but a two, Tamina with a uppercut and headbutt to Bayley, splash in the corner by Tamina, back butt in the corner to Bayley, Super kick to Bayley caught by Bayley into a knee bar but Tamina gets to the rope to break the hold. Bayley nails a running knee but Bayley tries to lift Tamina to no avail and Tamina lands on Bayley. Bayley rolls out the ring to get some rest time.
Bayley with punches to Tamina and hangs her on the bottom rope, Bayley grabs water bottle from the announce table and takes a sip and then throws water on her, Tamina is angry and gets up and slams her into apron, clothesline, then into security wall, Tamina sends Bayley back in the ring and nails Samoan Drop but Bayley escapes but is super kicked of the canvas, Tamina tosses Bayley over the announce table, Tamina sends Bayley into the ring, climbs to the top rope, super kick to Bayley and a Samoan Drop and as she goes for a pin Sasha Banks tries to stop it and then Tamina chases her then Bayley rolls up Tamina for the win to retain the title.
Winner via Pinfall and still SmackDown Womens Champion Bayley
We see Seth Rollins backstage talking about how Drew McIntyre knows him and knows what I can do and it is his destiny to become WWE Champion, Drew is still willing to step into the fire and do him a favour and unburden Drew McIntyre, this is not his show or company and my cross to bear and when I beat Drew it will be for the greater good and need me to be WWE Champion and Monday Night Messiah.
Singles Match for WWE Universal Championship – Winner is determined via Pinfall or Submission.
Challenger: “Fiend” Bray Wyatt Vs Champion: Braun Strowman
Wyatt tries to negotiate but Strowman grabs him by the throat, Strowman backs him into the corner and then a shoulder tackle takedown, Wyatt with chops but a shoulder tackle takes him down, Wyatt rolls to the outside, then Strowman follows and sends him into post face first, Strowman goes for run around the ring, but Bray moves out the way and then Wyatt sends Strowman into and over the announce table, then one of Bray puppets appear and then DDT by Wyatt on outside and then brings him back in the ring for a two, Wyatt sends Strowman into the steps, Wyatt does his backwards pose but Strowman chops him, then Tornado DDT followed by Sister Abigail for a two count. Bray Wyatt is in shock.
Bray Wyatt goes for Sister Abigail but countered into a chokeslam by Braun Strowman, Splash after splash to Wyatt in the corner, Strowman sends Wyatt to the outside then nails Strowman Express on the outside, Strowman tries to enter the ring but is kicked by Wyatt of the apron. Strowman appears with his goat mask and Wyatt says I knew you would come back to me, Strowman rips his shirt off, gets down to both knees and then they hug in the ring and the puppets appear and say he is back, Strowman removes the mask and throws it down and destroys the mask, then a running powerslam on Braun Strowman for the win.
Winner via Pinfall and still WWE Universal Champion Braun Strowman.
We see a video about the mystery agent and he says no-one is safe.
We see video buildup for WWE Championship.
Singles Match for WWE Championship – Winner is determined via Pinfall or Submission.
Challenger: “Monday Night Messiah” Seth Rollins Vs Champion: Drew McIntyre