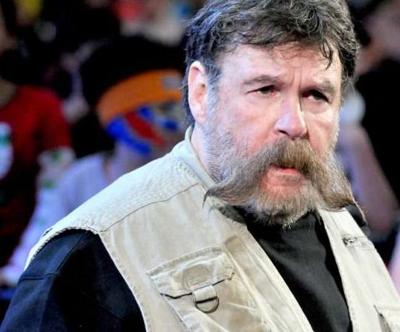 49:30 MANTELL ON WHICH NEW TALENT TO PUSH: “Say I bring in a brand-new guy and he is debuting on Saturday night we send him out there. I stand up high in the arena and I would watch the crowd. If they would respond to him, not knowing anything about him, if he got a little better response or did a little bit in the ring that got a response, that told me organically that if I did something with them, they would buy. It doesn’t matter if you won or lost OR anything else and this is another thing I always did. I put the baby faces over because when they paid money at the door, when they should leave happy and looking forward to the next week… When that final bell rings and you are ready to go, you’re ready to get the hell out of their… When that final match was over, of course with the good guys with their hand in the air and everybody was happy but nobody left because I educated them, don’t leave because we’re going to get the trailer for next week and boom something would happen and it probably took me about three weeks and they were educated.”

1:15:00 Mantell on not being on this season of Dark Side of the Ring: “Jericho is doing it and it’s not they didn’t want to use me, they couldn’t use me and the reason being because this is in Canada, and they partnered with another TV station that is like the PBS of Canada, and since they used government money, one of the rules is anybody that worked on the show other than talent, if you had a cameraman you had to be Canadian. If you have a sound engineer, he had to be Canadian, the narrator had to be Canadian and guess what? I’m not Canadian… The guy told me he said I’ve been trying to work this out to get you back up her and we could work together because the people were enjoying you, but I can’t do it. I tried to put all kind of titles on you but your still American”

1:39:00 Mantell on the Zeb Colter character: ” They were coming into town and the talent relations guy called me to have told me to come down and talk to HHH. I seriously thought they wanted me to be an advisor or instructor. I drive down there about 330 PM, and they brought me in around 4:30 and said triple H wanted to talk to me, and what they were looking for was a mouthpiece for Swagger because they wanted to start using him again. So, they said can you do a promo so we can show Vince at 5:30. I did the interview and all the information they gave me was this was the character is one that is almost left over from the tea party. They didn’t say that but of somebody who thought the country who believes has lost their vision and didn’t know which direction it was moving and it’s going to hell in a handbasket… They said we will give you a few minutes and they did not give me long. Did you see the movie Grand Torino with Clint Eastwood? That’s what I thought of immediately. He saw all those factories closed and all these immigrants were around, so I started channeling Clint Eastwood. So, I said when I walk down the street, and they did not give me these words, I just made am up on the spot. When I walked down the street, I see people that don’t look like me, who don’t talk like me, who don’t eat the same food I do, and I say what happened to my America? Where did my American go? I did about three of them but in the last one I said We The People. Well that was at 430. Vince saw it at 5:30, they hired me at 6:30 and I went to work at RAW that night at 7:30 and I was live on RAW at 8:00. I believe I was the oldest on-air character they ever hired. The one thing I tell people when I walked in that dressing room is only 75% of the dressing room had no idea why was there and were looking at me like who brought the Uber driver here. Natalya asked who I was.”

(thanks to Chris Siggia)