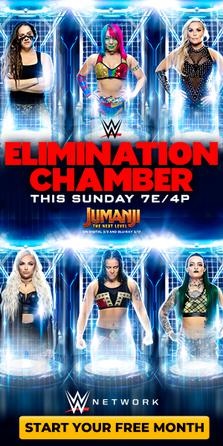 Credit to F4Wonline.com for the recap

The announcers reminded us that Ryder and Hawkins won the tag titles at WrestleMania last year coming off a long losing streak.

Ryder distracted Erik long enough for Hawkins to catch him with a knee and they took control. This allowed them to take a quick commercial break. Ivar made a tag and they eventually gave Ryder (who accidentally gave Hawkins a Rough Ryder) the Viking Experience for the pinfall win.

They’re still pushing that WrestleMania is free for new subscribers on the Network.

Zelina Vega did a longer-than-usual interview with Sarah Schreiber where she spoke about Andrade’s title defense against Humberto Carrillo. She actually put over Carrillo but said his future success will not come at Andrade’s expense.

The Usos did a quick promo.

Jonathan Coachman literally read off a script to tell us how exciting tonight’s show would be.

Gulak received some cheers when he was announced from Philly but the crowd chanted for Bryan as the match started. They mat wrestled for the first few minutes. The story was that Gulak had an answer for almost everything Bryan did, which caught Bryan off guard. Bryan broke up the sequence by delivering a kick, so Gulak smacked him in the face.

Bryan rolled out of the ring to sell it and just barely beat the ten count. Bryan came back with a running clothesline and kicks in the corner. Gulak crotched Bryan on the top then did an inverted suplex off the top and transitioned into a dragon sleeper. Bryan slipped out and transitioned into a Yes Lock (while also throwing a few elbows).

Gulak passed out in the hold and the referee called for the bell. Bryan picks up the win. An excellent and very different from most WWE matches. Bryan led the crowd in Yes chants afterwards. After Gulak got to his feet, Bryan pointed at him so the fans could give him a round of applause, then did the Yes chants again.

Robert Roode told Kayla Braxton they would win the titles. Dolph Ziggler mentioned his girl Mandy Rose which got some boos. The TV screen behind Braxton glitched for a moment as they spoke.

There was a moment where Andrade did his pose to get heel heat but the crowd didn’t react at all. One highlight was Carrillo doing a big hurricanrana off the top rope. This got the crowd into it. Andrade used a running double knee strike for two, then Vega lifted up the black mats. (It wasn’t concrete underneath, but rather the black boards they use to cover up the ice surface.)

Andrade tried a DDT on the “concrete” but Carrillo countered with a back body drop on the mats. After a Carrillo dive, they traded rollups in the ring for a series of two counts until Andrade caught him in a rollup while holding the tights for the pinfall win. Pretty good match and the crowd got into it by the end.

AJ Styles told Charly Caruso that Luke Gallows and Karl Anderson would be with him for his no disqualification match. He admitted it wouldn’t be a fair fight, because it’s never fair when someone has to fight him. Styles then sort of trailed off and just left the interview.

Each team got full entrances before taking their time getting into their pod. It took a while. The Usos and New Day started the match. They said the intervals would be five minutes but according to my clock the first interval was only about three and a half minutes. Lucha House Party entered next.

Dorado, Metalik and Kingston fought on top of a pod until LHP managed to shove Kingston off. Dorado and Metalik each hit dives to the Usos and New Day. Just in time, Miz and Morrison entered next with everyone down. There was a cool spot where Metalik leaped off a pod and took down Morrison with a hurricanrana.

Heavy Machinery were in next and tossed everyone aside. They repeatedly squished the Usos into the cage. The crowd chanted for Otis. They also squished Big E, then Otis did the caterpillar.

There was a wild spot where Dorado climbed to the underside of the cage ceiling and did a shooting star press down onto a pile of bodies. Crowd popped for that. Unfortunately for them, Heavy Machinery gave Metalik a Compactor for the pinfall elimination at 17:15.

Ziggler and Roode were in next and they briefly worked together with Miz and Morrison. Ziggler climbed a pod to avoid Otis, but Tucker climbed up after him. Tucker dropped Ziggler into Otis who dropped him over the top rope. Tucker then did a damn senton off the pod to New Day and the Usos.

Ziggler and Roode doubled teamed Otis but he fought them off. Otis tried a charge but Ziggler moved and Otis smashed through the pod and straight out of the ring to the floor. The crowd chanted “holy sh*t” and they played this up big. Tucker was worried about Otis as officials checked on him.

The Usos and New Day teamed up on Miz and Morrison before eventually fighting each other. Kingston missed a dive off a pod, then Miz and Morrison both covered him for the pinfall elimination at 29:05. This felt like a fairly weak way to eliminate Kingston.

They announced that Steve Austin will be on the 3/16 Raw in Pittsburgh. They did this by showing a Tweet.

Shayan Baszler and Asuka were each shown warming up backstage.

Caruso asked Natalya about Beth Phoenix. Natalya was disgusted by Randy Orton’s actions and comments about Beth. She couldn’t wait to see Edge get his hands on Orton on Raw. Natalya thought of Beth and Edge as family and family meant everything to her. She said she would use her anger and unleash her legacy on her opponents in the Chamber.

For the first five minutes, they wrestled a mostly normal match until Styles grabbed a Kendo stick and hit a few shots. Black set up a table but Styles attacked him with a chair. Styles appeared in complete control until Black came back with strikes.

Styles caught him in the Calf Crusher but Black grabbed the Kendo stick and smushed Styles’ face with it. Black attacked him with the stick but Styles came right back with a Pelé kick. Styles hit a version of the Phenomenal forearm but Black kicked out. Styles followed with a brainbuster for two. Styles went to the top but Black nailed a running kick.

Black used a springboard moonsault and German suplex, each for two counts as the OC just stood outside and watched. Styles followed with a nice-looking Ushigoroshi. He attempted a Tombstone and the crowd buzzed, but Black slipped out and kicked Styles into a steel chair.

Styles tackled Black over an announce table and tried a suplex but Black kicked his leg out of his leg. Black then flew off one table and put Styles through another table with a double knee strike.

Black set up for the Black Mass then, finally, after 20 minutes, the OC jumped in the ring. Black fought them off for a moment but they all swarmed him. Gallows and Anderson gave him a Magic Killer.

Black gave Styles a Black Mass for the pinfall win. Crowd popped big for the finish.

The match itself was fine but the crowd wasn’t that into it until the end.

About eight minutes into the match, AOP got involved, so Viking Raiders instantly appeared and the teams brawled to the back. The crowd was into the Street Profits at the beginning but they were dead for most of the match. They came alive when Kevin Owens appeared in the crowd.

Owens walked down the steps while eating popcorn, then sat on one of the announce tables to watch. Owens chucked popcorn in Rollins’ face then casually sat back down, which was funny. Angelo Dawkins wiped out Rollins with a tackle, then he and Montez Ford powerbombed Murphy into the barricade.

Dawkins gave Murphy a spinebuster, then Ford finished him off with a frog splash for the pinfall win. Street Profits retain. After the match, Owens gave Rollins a stunner, then grabbed his popcorn and left.

The show is starting to feel long but they still aired a long video package to set up this match. Also, almost three hours into the main broadcast, they introduced us to the international announcers.

Zayn did a long promo before the match claiming he would face off against Strowman and encouraged his teammates to remain on the apron. Zayn (who wore pants instead of his wrestling tights) was lying of course and immediately tagged in Nakamura. Strowman no-sold Nakamura’s offense and went to work on him, but he was too focused on Zayn, so Nakamura kicked his leg out of his leg and the heels took control.

Strowman tried mounting a few comebacks but they kept cutting him off. Nakamura gave Strowman a Kinshasa into the steel post (which was an actual post instead of a video board). Then the trio gave Strowman a combo suplex/Helluva Kick and Zayn pinned him for the win. Zayn is the new Intercontinental Champion.

I know it was a handicap match, but this felt like another babyface losing too easily on this show.

The announcers ran down the WrestleMania card.

Riott and Natalya started. They worked well together for the first interval but the crowd seemed bored or tired. Logan was in next and gave Natalya a double knee strike into a pod. Later, Logan dove off a pod onto both women. Natalya then powerbombed both Logan and Riott.

They sped up the interval times because Baszler was in next less than eight minutes into the match. Baszler pretty much immediately tapped out Logan with a Kirifuda Clutch at 7:53. Right after that, she tapped out Riott at 8:12. She then tapped out Natalya at 9:34.

Baszler stood alone in the ring awaiting the next entrant. The crowd began booing as Baszler paced around. Asuka yelled at her from her pod.

Morgan was in next. Baszler swung her into the cage, then into a pod, which sounded painful. Baszler then put Morgan in the Kirifuda Clutch and she passed out at 14:58 for the elimination. Baszler stared down Asuka as she did it.

Asuka was in last. Asuka missed a roundhouse kick but connected with a running hip attack and kicks to the chest. Baszler caught her and hit kicks of her own. Asuka hit a roundhouse kick and applied the Asuka Lock. Baszler rolled to the outside and slammed Asuka into the cage, then attacked her injured wrist.

Asuka managed to fight out of a Kirifuda Clutch but Baszler went back after the wrist. Baszler followed with a knee strike then applied the Kirifuda Clutch and Asuka passed out for the elimination. The crowd booed. Baszler eliminated everyone for the win and gets a title shot against Becky Lynch at WrestleMania. (Lynch was shown watching the match in the back.)