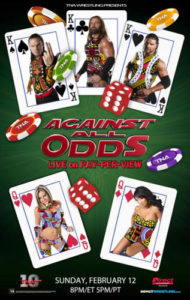 2009 – It is announced that the Von Erich family would be inducted into the WWE Hall of Fame, as a group, on April 4th.  The group consisted of Fritz, Kerry, Kevin, Mike, David, and Chris. Kevin would represent the family on Induction Weekend.

2016 – Kento Miyahara defeats Zeus, to win the vacant AJPW Triple Crown Championship. The title had been vacated by Suwama a month earlier, after he suffered a ruptured Achilles Tendon.