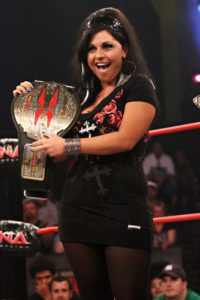 1989 – On WWF’s second edition of The Main Event, The Mega Powers (Hulk Hogan & WWF Champion Randy Savage (with Miss Elizabeth)) defeated The Twin Towers (Akeem & The Big Boss Man (with Slick)), when Hogan pinned Akeem after a legdrop. During the match, Savage was thrown out of the ring by Akeem onto Elizabeth. Hogan carried Elizabeth backstage for medical attention. She came to, and told Hogan to return to the ring. Hogan came back to the ring and called for a tag, and was then slapped in the face by Savage, who then left the ring. Hogan won the match, then went to the back as well. Savage accused Hogan of trying to steal Miss Elizabeth away. Hogan then begged Elizabeth to talk some sense into his partner. Savage would then hit Hogan with the WWF Title belt and attacked him. Brutus Beefcake and several officials broke up the fight. The Mega Powers’ five-month partnership was over, and the stage was set for Savage’s title defense against Hogan two months later at WrestleMania V. The program earned an 11.6 TV rating for NBC.

2000 – At a press conference at the old ‘WWF New York,’ it is announced that the XFL will launch on February 3, 2001. The XFL, a 50-50 joint venture between the WWF and NBC, would be a new pro football league combining the NFL with the popularity of professional wrestling.

2001 – Exactly one year later, the XFL’s inaugural games are held in Las Vegas and Orlando. NBC airs a national broadcast of the New York/New Jersey Hitmen vs Las Vegas Outlaws game; when that game became one-sided, NBC would switch over to the Orlando Rage / Chicago Enforcers game. The opening night drew a 9.5 TV rating for NBC, double what the network had promised advertisers.
The XFL was advertised as “real football,” with fewer penalties and fewer rules. Players wore microphones, there were cameras in the huddle & locker rooms, and all 8 teams featured scantily-clad cheerleaders. A few WWF announcers and alumni were used to do play-by-play and commentary for the XFL; Jim Ross, Minnesota Governor Jesse Ventura, Jerry ‘The King’ Lawler, and Jonathan Coachman.

2001 – At a house show in Greensboro, NC, Raven loses the WWF Hardcore Championship to K-Kwik. With the 24/7 rule in effect, Crash Holly pins K-Kwik to win the title. Crash would drop the title back to Raven by the end of the show.

2003 – This evening’s Monday Night RAW is the first where Randy Orton, Triple H, Ric Flair, and Batista are referred to as Evolution. The name was chosen after Triple H spoke about how the four were part of pro wrestling’s past (Flair), to the present (himself), to the future (Batista & Orton).

2014 – Emma makes her debut on the WWE main roster, on this evening’s Monday Night RAW. Chosen by Santino Marella from the crowd, Emma debuts by participating in a dance-off against Summer Rae.

2016 – Former WWE star Justin Gabriel, an original member of The Nexus and The Corre, makes his debut in Lucha Underground under the name ‘Darewolf’ P.J. Black.

Today would have been the 60th birthday for WWE Hall of Famer, Kerry Von Erich.