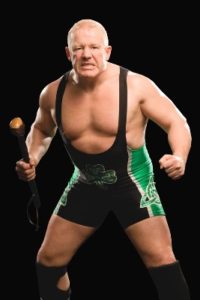 1999 – Eight days after his 61st birthday, the legendary Giant Baba passes away after complications from colon cancer.

1999 – In an Empty Arena Match on Halftime Heat, Mankind defeats The Rock, to win the WWF Championship. The match occurred during halftime of Super Bowl XXXIII (Falcons vs. Broncos).  The match draws a 6.6 TV rating for the USA Network, and would be the highest rating for any Sunday Night Heat episode. Mankind wins the match after using a forklift. to pin The Rock with a pallet on the loading dock.

2000 – In the Monday Night Wars, WWF RAW IS WAR (6.6 TV rating) easily beats WCW Monday Nitro (2.8 rating). On RAW, Harvey Wippleman, disguised as ‘Hervina,’ defeats The Kat, in a Lumberjill Snow Bunny Match, to win the WWF Women’s Championship. Wippleman becomes the first (and only) male to win the Women’s Title.  On another note, The Rock defeated Kurt Angle via pinfall; this was Angle’s first pinfall loss in the WWF.  He had lost to Tazz at the Royal Rumble, but via submission.
On the same night, four ‘Radicalz,’ who had left WCW a couple weeks earlier, appear on WWF television. Chris Benoit, Eddie Guerrero, Dean Malenko, and Perry Saturn were sitting ringside during a Tag Team Championship Match between The New Age Outlaws and the team of Al Snow & Steve Blackman. After Road Dogg cheap shots Benoit, the four Radicalz would jump over the barricade, and attack Road Dogg & Billy Gunn. Guerrero would injure his elbow after hitting a frog splash on Billy Gunn.

2002 – On this evening’s SmackDown, Diamond Dallas Page defeats Christian, to win the WWF European Championship. It’s the only singles title DDP would win in the WWF.