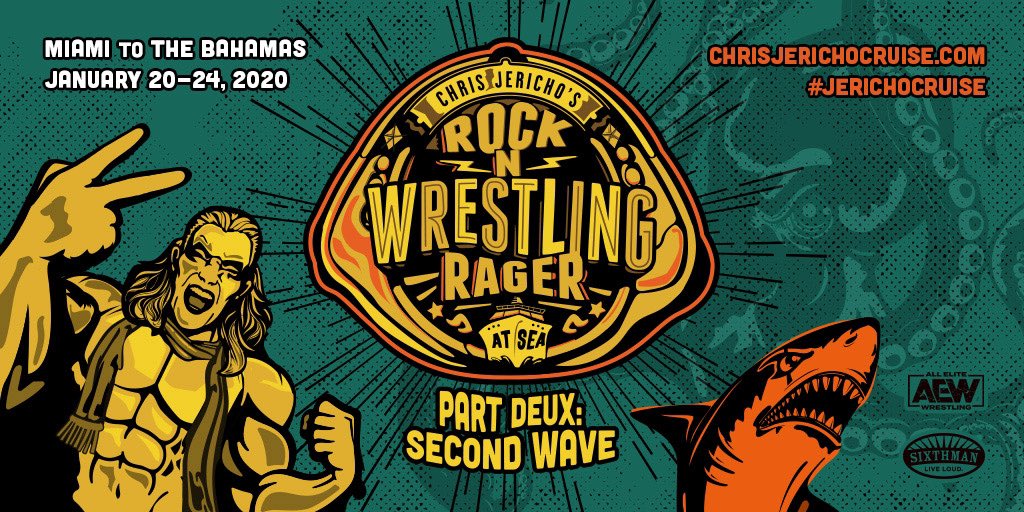 Excalibur, Jim Ross, and Tony Schiavone are on commentary aboard the Ship of Jericho in Nassau, Bahamas. They run down the card for tonight’s show.

Match #2 – Singles Match: Dr. Britt Baker, D.M.D. vs. Priscilla Kelly
They lock up and Baker takes Kelly to the mat. Baker applies a side headlock and gets a crucifix pin for a one cont. Baker takes Kelly back to the mat and goes for another cover, but Kelly kicks out again as the show heads to a commercial.
Back from the break, Kelly is in control and stretches Baker through the ropes. Kelly delivers a dropkick, but Baker comes back and pulls Kelly to the mat. Baker delivers forearm shots and drops Kelly with a few clotheslines. Baker delivers a knee in the corner and drops Kelly with a Slingblade. Baker goes for the cover, but Kelly kicks out. Kelly comes back with a kick to the head and slams Baker to the mat. Kelly goes for the cover, but Baker kicks out. Kelly goes for a knee strike, but Baker dodges and delivers a superkick. Baker slams Kelly to the mat and locks in Lockjaw and Kelly taps out.
Winner: Dr. Britt Baker, D.M.D.
-After the match, Schiavone interviews Baker. He congratulates Baker, but questions her tactics. Baker tells him not to question her and says he needs to appreciate his meal ticket and for not working at Starbucks anymore. Baker says the people don’t look down on Schiavone for that, but they do look up to her. She says she’s the best woman on the boat and Ross sends it to a commercial to cut her off.

A video hype package for the feud between Cody and MJF is shown.

Match #4 – Singles Match: Joey Janela vs. MJF
They lock up and MJF shoves Janela into the corner. MJF applies a wrist-lock, but Janela turns it into one of his own. MJF comes back and takes Janela to the mat, but Janela gets free. MJF offers a handshake, but Janela slaps him in the face. Janela delivers right hands, but MJF leaves the ring. Janela goes after him, but MJF rakes his eyes. MJF charges at Janela, but Janela sends him back into the ring. Janela goes up for the elbow drop, but MJF rolls out of the way. MJF gets behind Ref Aubrey and then decks Janela with a right hand. MJF stomps on Janela and connects with a senton as the show goes to a commercial.
Back from the break, Janela takes MJF down with a superplex. Janela goes for the cover, but MJF kicks out. Kip Sabian and Penelope Ford come to the stage and make out in front of Janela. Janela goes for the elbow drop on MJF, but MJF dodges it and takes Janela out with the Double Cross and gets the pin fall.
Winner: MJF
-After the match, MJF cuts a promo running down Cody, but Cody interrupts him. MJF reminds Cody that no matter what he says or does to Cody, Cody can’t touch him. MJF drops the mic at Codys feet and says it’s his time to shine. Cody goes to pick it up, but MJF kicks it away. MJF flips Cody off and leaves the ring. Cody says he cannot touch MJF, but they can. The Young Bucks lay MJF out with a double superkick and then throw him in the pool.

Schiavone is with Omega and Page. Omega says he would have never thought that he would be Tag Team Champions with one of his best friends. Page says he said he was going to beat both their asses and he did just that. Omega says he has spoken to management and he will give PAC his rubber match eventually. Omega says the titles will be the priority as long as they are champions. The Young Bucks walk up and congratulate them. Page says it’s funny that they have the titles before The Bucks do and walks away.

Announced for next week: Private Party and Darby Allin vs. Chris Jericho, Santana, and Ortiz, The Young Bucks vs. The Butcher and The Blade, and Kip Sabian vs. Cody.

Jericho joins the commentary team for the main event.

Match #5 – #1 Contender’s (AEW World Championship) Match: PAC vs. Jon Moxley
Neither man gets an advantage early on, but then PAC applies a side headlock. Moxley drops PAC with a shoulder tackle, but PAC comes back with a back elbow, Moxley comes back with chops and then drops PAC with a German suplex. Moxley clotheslines PAC in the corner, but PAC comes back with an elbow shot. PAC punches Moxley in his injured eye and then kicks him in the face. PAC stands on Moxley’s face in the corner and then connects with cross-face shots. PAC stands on Moxley’s face again and then delivers a knee strike. PAC sends Moxley to the floor and slams him into the apron as the show heads to a commercial.
Back from the break, Moxley and PAC are brawling all over the ship. They get back to the ring and PAC rakes Moxley’s eyes. PAC delivers a dropkick, but Moxley comes right back with a clothesline. They exchange shots and PAC kicks Moxley in the midsection. Moxley comes back and slams PAC to the mat and goes for the cover, but PAC kicks out. PAC punches Moxley in the eye and sets him up top. Moxley shoves PAC back to the mat and goes for an elbow drop, but PAC gets his knees up. PAC goes for the Brutalizer, but Moxley counters and gets a roll-up for two. PAC delivers an enzuigiri and kicks Moxley in the face a few times. PAC delivers a basement dropkick and goes for the cover, but Moxley kicks out. PAC goes up top and goes for the Black Arrow, but Moxley gets his knees up. Moxley rolls PAC up, but PAC kicks out at two. PAC delivers a snap German suplex and goes up top again. He goes for the Black Arrow again, but Moxley moves. PAC delivers a superkick, but Moxley comes back and hits the Paradigm Shift. Moxley goes for the cover, but PAC kicks out.
Moxley goes up top, but PAC cuts him off. PAC delivers a superplex and locks in the Brutalizer. Moxley gets to the ropes and rips the bandage off of Moxley’s eye. PAC delivers left hands to Moxley’s eye, but Moxley rolls him up for a quick two count. Moxley drops PAC with the Paradigm Shift and then delivers another one and gets the pin fall.
Winner and number one contender for the AEW World Championship: Jon Moxley
-After the match, Jericho and Moxley stare each other down as the show comes to a close.