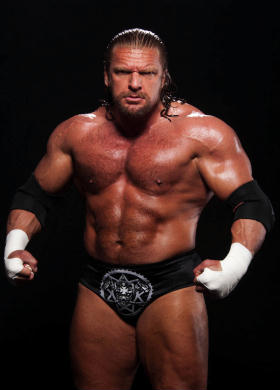 Triple H was a guest on Loudwire’s Wikipedia: Fact or Fiction, clarifying who actually thought of the D-Generation X name, as well as Vince McMahon’s reactions backstage to their edgy promos when the stable was first formed. Highlights are below.

On Vince McMahon’s original reaction to DX’s edgy material: “Vince was hesitant about almost everything we were doing at first. Theres a period of time in the very beginning of this where every week when we would come back, he would ream us. ‘You guys are going to get us thrown off the air!’ And Shawn was the guy, because Shawn was so talented, he could get away with things that to this day, I still can’t believe that he would do this, but Vince, it’s almost like Vince saw himself as a Dad to Shawn and felt like, ‘I can’t throw this kid out because he will self-destruct so I have to keep him with me to teach him how to be something more.’ So he would put up with these things to try to mold him into being something better. I was the guy that was just next to him going, ‘Geez, I hope I don’t get fired.’ When Vince is mad, his eyes change. And I can remember being in the ring and him, this is when we were unscripted, very unscripted, and I remember them saying, ‘And then Shawn will cut a promo, you’re going to cut a promo, you can do it directly to Vince’ and the whole thing, and I’m like, ‘How far can I go?” And he was like, ‘Go where you think you can.’ That’s what he told me backstage. And I remember cutting the promo and being in his face, and when we walked backstage, he was pissed, but when I went to him and I said, ‘Was that OK?’ He was like, ‘Yeah, that was fine,’ and walked away from me.”

On starting to get letters from USA Network about getting thrown off the air: “Every week we were getting it, there’s a flip point on that, and it’s kind of a cool story, where USA was now starting to send letters that we were gonna get thrown off the air. USA then sent the letter to us that said, here’s a very distinct, from 8 to whatever the hours we were on the air, ‘From 8 to 9, or whatever it was, D-Generation X, this group, they can’t say these words, they can’t do this, they can’t do that, from 9 to 10, we’re OK with them doing this, but they still can’t say that and do this.’ And when we got to TV that day, Vince was like, ‘You guys happy? Look at that, you’re gonna get us taken off the air,’ and the whole thing. But, things were starting to click. We had both noticed that Vince was starting to get less vocal about screaming at us when we came back. It was like, rather than a 10 minute promo, it was a 5 minute promo. So, he’s like, ‘What do you guys want to do about this? We gotta straighten this stuff out, guys.’ And we were like, let’s use it. And that’s when we did the, it’s the Bill Clinton promo in front of the podium where we say every horrible thing, we basically verbatim, some of it read off the sheet of paper that they had sent us, and beeped it out, and did this whole big thing, and it started the show. Vince thought it was funny, it was like, we’ll see what happens, worst thing that can happen, they hate it, and we’re headed down that road anyways. We did it, and shortly thereafter we got a letter that said, ‘Bravo on using the letter for something entertaining and the numbers are going up, congrats.’ And that was like the, somebody came and clicked the handcuffs off us and DX was free to go do what we were doing.”

On Shawn Michaels throwing paper off Vince McMahon’s forehead in response to WWE trying to script them: “And then it started to become encouraged and then they wanted to try to script us, and I remember Shawn crumbling a piece of paper, throwing it and bouncing it off Vince’s forehead, and saying, ‘You didn’t write it before, you ain’t writing it now,’ and walking out of the room, and I was like, ‘I’m just going to go with him.’ It was tense but it was good.”