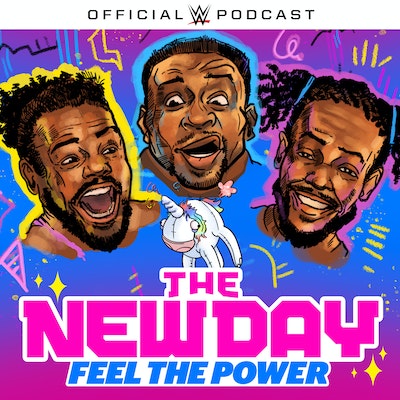 On the latest Feel The Power, the New Day discussed trying to work with WWE Creative in coming up with names for their group early on. The episode, titled “The List,” saw the group run through a three-page list of names suggested to them ranging from (The Tribe, The Voice, The Achievers) to the strange (Tri-verse, the A-Men, Redeem) to the just plain bad (Trillogy, Saving Our Souls, The Temptations).

While discussing the list, Xavier Woods and Big E. discussed why they had difficulty working with Creative to come up with ideas and why they got the list of names they did. Highlights are below, along with the full podcast:

Woods on the creative team’s challenge in coming up with ideas for talent: “And so okay, to that point of people trying. There are what? Sixty talent on the main roster, 80 talent, whatever. So there’s a small group. What, 10, 12 guys and girls? So it’s gotta be more than difficult to come up with stuff for so many different kinds of people. And then at the time, there wasn’t anybody in the writer’s room who looked like us. Who had similar life experiences to us … So yeah, it is a difficult thing, and I know we say a lot, ‘Oh, they didn’t try. They didn’t do all this.’ But obviously, there are a lot of people there who are trying to do the best that they can. But sometimes it’s going to be a lot more helpful to the talent that is on screen when they have someone working with them who understand the way that they would speak, they can understand that their ideas are not as commonplace as some people may think because of the situation they’ve been through throughout their lives. And so, that is something that we dealt with through this entire process of trying to get on TV as The New Day.”

Big E. on why they had so many issues during the creation of the group: “Also, I don’t think we were really a priority. I don’t wanna say that people half-assed it because we’re not a priority. Sometimes it’s easy to forget the path. We were just guys trying to get on TV. And honestly, we weren’t really supposed to make it. It feel like a lot of this was, ‘Just give ’em a name, get ’em out of here. They’re annoying us every week, coming in with these pitches and trying to have meetings every week. Let’s just give them a name, let’s come up with a bunch and get it done.’ So when you’re not a priority — I’m not saying that they didn’t go all in. But if we were in that golden circle of six to eight guys, or how many ever it is that are always looked out for, that are always booked well. I think there would be more effort going into the name. So we were just three guys, honestly, who were just trying to get on TV. We were supposed to be a mid-card faction at best, probably that was supposed to last three months. ‘Give them a few matches, let them sink or swim. They’re probably gonna sink. Be done with it and move on.’”