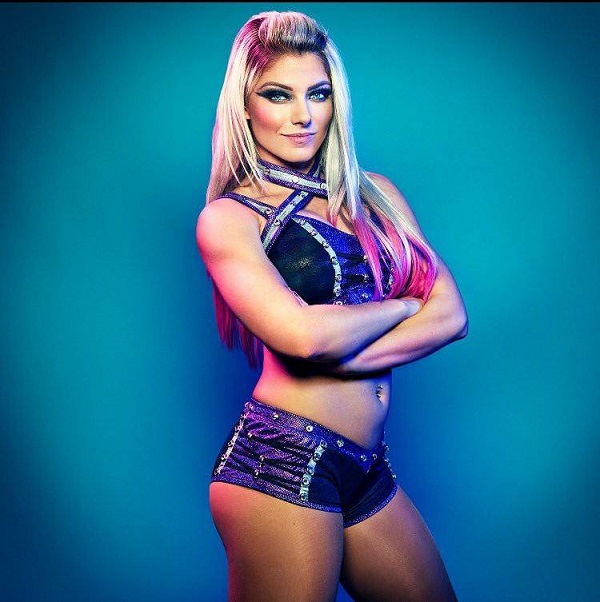 In an interview with Muscle & Fitness, Alexa Bliss said that she would still like to have a match with Trish Stratus, as they never got to have a match at Evolution. The match was announced, but eventually became Trish and Lita vs. Mickie James and Alicia Fox. Here are highlights:

On how she makes time to train and eat healthy: “Honestly, I try to find the time that I can, because a lot of times it’s either choosing to work out, or choosing to sleep Opens a New Window. [and recover] on the road because sometimes you get to the hotel and you have to be up early in the morning Opens a New Window. , after getting to the hotel room at 2 or 3 am [after a show]. Sometimes you need sleep, and sometimes you can workout. Sometimes you choose sleep, because if you haven’t had enough sleep you won’t get a good workout. But I actually have a gym at home Opens a New Window. that I am working on. So, when I’m home on those days, I definitely try to utilize the time. But I try to find healthy foods on the road like Whole Foods and grocery stores. I get in a quick workout when I can, and I have multiple gym memberships Opens a New Window. so wherever we are at in the country, there’s gonna be a gym that I have a membership for, and you have to find the time and make it happen.”

On how important it is for people to talk about body confidence issues: “I think it’s very important. I remember being younger and not really having anyone that I could look up to, who was actually open and honest about it. It’s a thing that people deal with through all stages of life and people have insecurities, especially now with social media it’s one hundred times worse. So, I try to be very open and honest about body positivity and that type of thing on social media because people take it to heart. People destroy themselves trying to get elevation from people they don’t even know on social media. So, I try to be open and if I’m struggling, I’ll be honest about it and show how I get through. That’s kinda why I have the certain tattoos that I do and I’m actually getting another tattoo on my shoulder with a recovery symbol on it, and I love that. But I try to keep positive and send a positive message Opens a New Window. out there because not everyone can feel good about themselves every day, but you are worth more than what social media says.”

On which past Superstar she wants to face: “Trish Stratus, because I didn’t have my match with her at Evolution.”