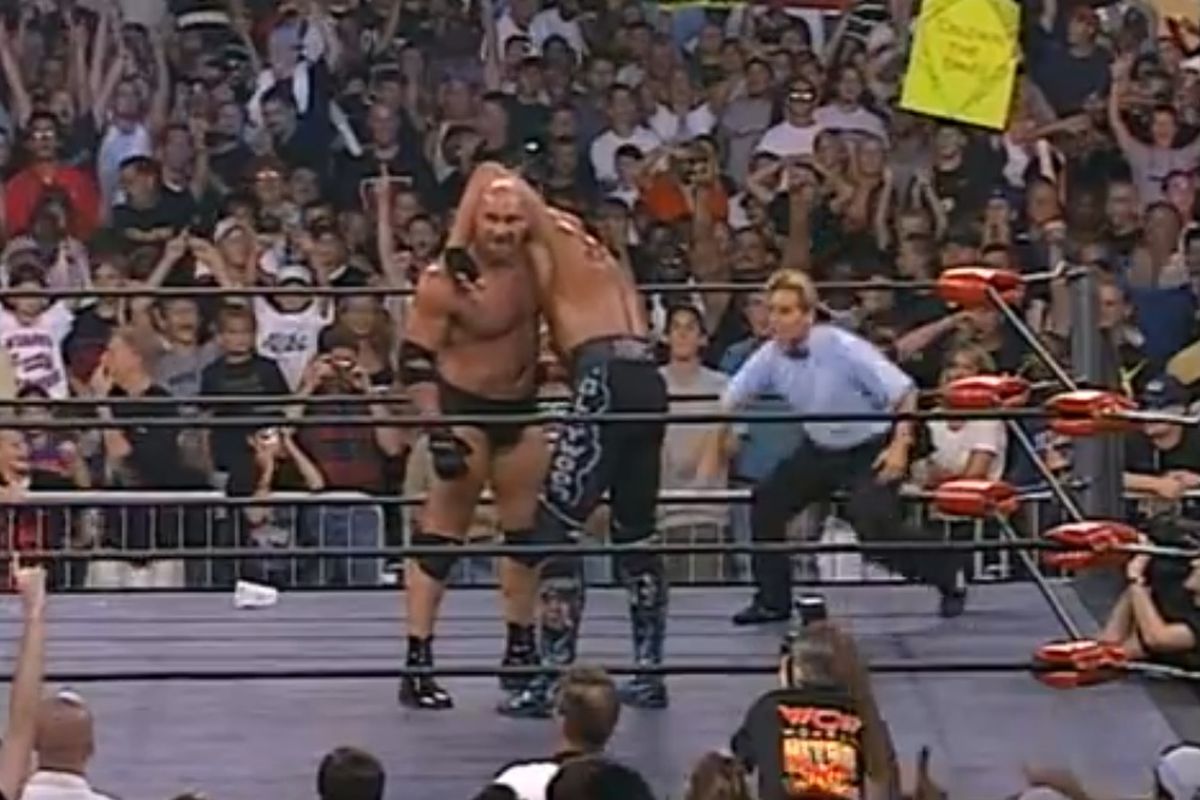 Eric Bischoff discussed the famous Hulk Hogan vs. Goldberg match on Nitro during the most recent 83 Weeks and whether Hogan’s claim that it was supposed to be a dark match was true. Hogan claims in his book that the July 6th, 1998 match was originally scheduled to be a dark match but that after Raw trounced Nitro in the ratings the week before, Bischoff called him and asked him what they should do to turn things around. Hogan claimed that he told Bischoff to put the match on live TV. Goldberg went on to win the match and claim his first run with the WCW World Heavyweight Championship.

Bischoff acknowledged to Conrad Thompson that the match was Hogan’s idea, but said it was never discussed as a potential dark match and that, on his part at least, it wasn’t a reaction to the previous week’s ratings. Highlights from the discussion, as well as the full podcast, are below:

On the rumor that Hogan vs. Goldberg was supposed to be a dark match: “That’s not true. And I don’t mean to interrupt, maybe you were gonna ask me to respond to that, but there’s nothing more antithetical to the truth than the statement that was reported there. That’s not true. It was never a conversation about having that as a dark match, EVER.”

On Hogan claiming that it was a dark match and that he suggested it be put on TV to boost ratings: “No, well let’s just make it clear as we set this up, ’cause that’s important. It was Hulk Hogan, I was driving — and I think we’ve talked about this before. I was in Marina Del Rey, I had some business in Los Angeles. I was on Highway 60 in Marina Del Rey, and Hulk Hogan called me, and he goes, ‘Hey, do you have a minute to talk?’ I said, ‘Sure.’ I’m gonna get through this quick. I literally pulled off on the side of the road by Jerry’s Deli, and pulled off on the side of the road. I was driving a convertible at the time, which was why I pulled off on the side of the road so I could actually hear him on my cell phone. And he said, ‘I’ve got an idea! Let’s do this [the Hogan vs. Goldberg match].’ And I said, ‘Are you sure this is what you wanna do?’ He said, ‘I’m absolutely sure.’ And that’s what set it in motion. Hulk Hogan’s one of my best friends, I love him like a brother. But that story [about it being a dark match] is not accurate.”

On the match having nothing to do with Nitro being beaten badly in the ratings the week before: “It may have been the catalyst for Hulk to pick up the phone and call me, and say ‘Hey brother, I’ve got an idea.’ I can’t speak to what was going through his mind and how he was reacting to things before he picked up the phone. But I can, I swear it wasn’t a reaction from my part. It wasn’t my idea, it was his idea.”ain Event was Not to Snag Back Slumping Ratings