April Hunter: “Going from Playboy to Pro Wrestling is an example of me always doing things backwards” 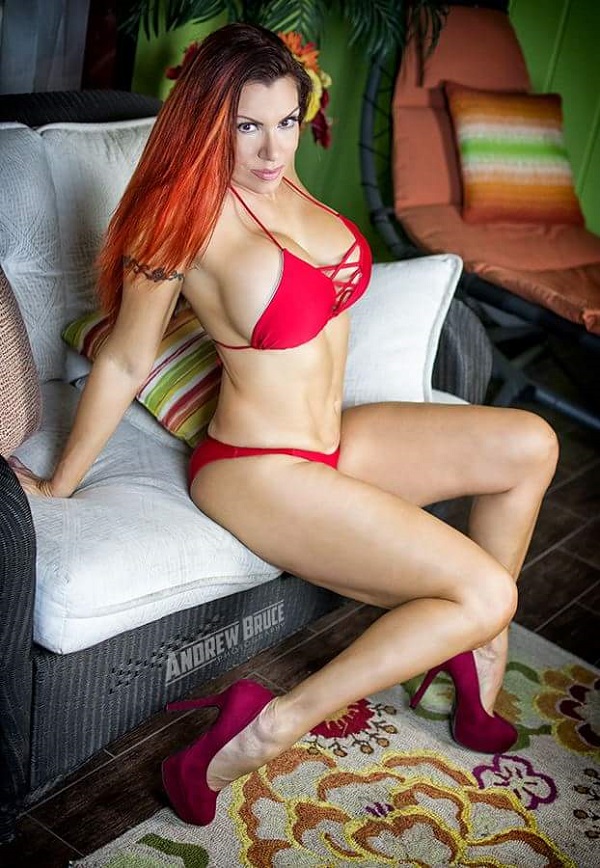 April Hunter has won many hats in her life: Playboy Playmate, Pro Wrestler, Cosplayer, Candle Maker and now College Graduate. In this exclusive interview April shares why it’s All Business, advice for Wrestlers doing Custom Photos and Videos plus a Special Message For Her Fans. (12:08 Mark)

Earning a Degree from Full Sail University (13:42)
I got my BFA in Creative Writing for Entertainment. My plan is to write for any form of entertainment; from Video Games to Film to Television.

Paying The Bills and Getting Older (15:57)
I’ve always written ever since I could hold a pencil. I wrote for my grade school newspaper, “Pen and Sword”, because the pen is mightier than the sword; which we’re finding out with social media. I’ve never been able to put food on the table with writing. I’ve loved it; never wanted to be a wrestler, always wanted to be a writer. But I’ve always found my boobs paid more bills than my brain so writing was always this thing that was kept to the side. Then I found out about the entertainment program for writing and thought “Oh my gosh. That would be perfect because I could get into something that pays.” It’s time to get on the other side of the camera because I’m not getting any younger. With writing it doesn’t matter what kind of shape my ass is in.

Can’t Work A Regular 9 To 5 (18:29)
I don’t want to work on someone else’s schedule. It wouldn’t work for me. I think that would be a form of suicide. My creative work ability is weird; I’ll do 16 hour days happily and some days I’m just useless and don’t get anything to do. I don’t want anyone to tell me I have to stop working at 5 or telling me I have to start working at 9.

Work Ethic and Going From Playboy To Pro Wrestling (19:16)
Being in Playboy was the equivalent of being a Massive Instagram Influencer today. Going from Playboy to Pro Wrestling is an example of me always doing things backwards. I had a really strange parenting situation because my Dad was never around and my Mom was Autistic. My Grandmother pretty much raised me and she had a really strong work ethic. When you don’t have anything and then you get something and have an opportunity to prove yourself it kind of matters more. Rather than being a victim I wanted to be a winner.

Treat Your Career Like A Business (22:10)
I’m fortunate; I do my best to keep up with the times and evolve. I think a lot of people don’t realize you when it comes to this you either evolve or die. Run a modeling career or an athletic career like a business because that’s what you are. My Dad told me treat it like a business and don’t take anything personal. If they tell you you’re good don’t take it personal. If they tell you you’re sh*t don’t take it personal.

Advice For Wrestlers Doing Custom Photo & Video Shoots (28:33)
Wrestling is a desired fetish and it always will be! The sooner people accept that the quicker they’ll make the money. A lot of women try to say “I’m a serious wrestler and wrestler is not a fetish”. Yes it is and Wrestling will always be a Fetish! You can be Leilani Kai and someone is j*rking Off to you. Know your boundaries because someone is always pushing your boundaries. Make sure you know this is where I’m going and I’m not going to overstep it. I have some fast and hard boundaries and they will never be moved. Once I made those, things got more clear and easier for me. Never film anything you don’t want to come back and harm you. Once it’s on the internet it can be shared and brought up. Don’t think it’s not going to happen, just watch politics. They’ll dredge things up form 20 years ago once you get famous. The difference between love and film is film never goes away. Even snapchat because people can take screenshots. Make sure whatever you do you’re comfortable with it because you’re married to it. Married in a real way not an American way. Not in a “This might not work out and we’ll get divorced way”. If you’re doing Custom Work demand payment. If you’re doing Custom Stuff, it’s Custom. They can’t get it anywhere else. If they want you to do something for you GET PAID. I always ask for what I’m work plus a little bit more. Leave your Ego out of it. It’s a business so get paid. Forget about Likes. Likes don’t matter; they don’t pay the bills. Customs people are pretty particular because they’re dealing with fetishes. You’re probably going to have to rein them in with a bunch of emails, but that’s why you’re getting paid. You’re getting paid for your time also. If you’re not comfortable booking your stuff there are companies that will handle the bookings for you. Sometimes if I don’t want to feel like dealing with people, I send it to Women’s Mat Wrestling or Slammin Ladies. I have them handle it for me.

Special Message For Fans & Contact Info (46:26)
To everybody listening thank you for listening. If you’ve been a long time fan I’m incredibly grateful. The long time fans are the best because I’ve had many career transitions and they’ve been there for them. New time fans are great too. Come and hang out with me on my page Patreon.Com/AprilHunter. I also write on Medium.Com and have my social media @AprilHunter. My Etsy Store is etsy.com/shop/AprilsScentSations. You can remember it because the initials are ASS. I make Organic Soy Candles and Artisan Soaps. My thing is they are very strong scented, uniquely scented and healthy. Just like ME!

Hear the rest of this interview & more on the latest edition of the Duke Loves Rasslin Podcast on Soundcloud, Itunes, Youtube and other leading Podcast Apps!