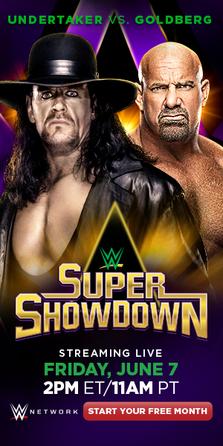 Beth Phoenix, Charly Caruso, and David Otunga are on the Kickoff Panel, which is being hosted inside WWE Studios in Stamford, Connecticut. They run down the card for the show, and then footage of Brock Lesnar’s beat down of Seth Rollins from this past Monday Night Raw is shown. A promo from Paul Heyman is shown. Heyman says Rollins paid a price to Lesnar when Lesnar attacked him with the chair on Raw, and he will pay another price today when Lesnar takes the WWE Universal Championship from him. Otunga says there is no way that Rollins leaves Super ShowDown with the title, and Phoenix disagrees.

Ricochet and Robert Roode hype up the 50-Man Battle Royal, each saying that they will win it in the end.

The hype video for the feud between Dolph Ziggler and Kofi Kingston airs. Otunga says everyone has embraced Kingston and that is something that Ziggler will never get. Phoenix says Ziggler is bitter and it has soured his talent and what he is truly capable of.

Talk turns to the match between Andrade and Finn Balor and a video package for “The Demon” plays. Otunga says The Demon will have a psychological threat on Andrade, but Phoenix says Andrade has been scouting and is prepared.

The panel talks about the 3-on-1 Handicap Match between Lucha House Party and Lars Sullivan. Otunga says LHP will have to use their numbers advantage and tire Sullivan out, but if Sullivan gets his hands on them it’s a wrap. Phoenix says we are just now seeing what Sullivan is capable of and there might be a monster that we haven’t seen unlocked yet.

Heavy Machinery and Rusev talk about the 50-Man Battle Royal, saying they’re going to win it.

The hype video for the match between Randy Orton and Triple H airs. Otunga says this match is about Orton trying to prove that he is the man now, and Phoenix says it is a battle about respect that is built out of disdain.

The panel talks about the match between Bobby Lashley and Braun Strowman and footage from the Arm Wrestling Match on Raw is shown. Otunga says this is a battle of egos and Phoenix says it is two alphas going at it.

The hype video for the match between Roman Reigns and Shane McMahon airs. Otunga says this all started with Reigns delivered a Superman Punch to Mr. McMahon, but it is hypocritical of Shane to talk about attacking someone’s father when he attacked The Miz’s dad. Phoenix says Shane has talked a lot of game and has a lot to back up.

The hype video for the match between Goldberg and The Undertaker airs. Otunga says Goldberg will be motivated in this match, and Phoenix says she is a bit worried because Goldberg likes to end matches quickly. She says if the match goes long, it will weight on the side of The Undertaker.

The Usos vs. The Revival
Dawson and Jey start the match and Jey drops Dawson with an uppercut. Jimmy and Wilder get involved, but The Usos take control and send The Revival to the floor. Jimmy delivers chops to Dawson and Wilder on the floor, but The Revival comes back and takes control. Wilder tags in and drops an elbow on Jimmy and goes for the cover, but Jimmy kicks out at two. Dawson tags back in and sends Jimmy to the floor. Dawson gets Jimmy back into the ring and drops him with a suplex and applies an abdominal stretch. Jimmy counters with a hip toss, but Wiler tags in. Jimmy kicks Wilder in the face, and Dawson and Jey tag in. Jey takes Dawson down with a Samoan Drop and then connects with a hip attack in the corner. Jey goes for the cover, but Dawson kicks out at two. Jey sends Wilder to the floor and takes Dawson down with a cross-body. Jey goes for the cover, but Dawson kicks out at two.
Jey rolls up Dawson, but Wilder distracts the referee. Jey superkicks Wilder and Dawson slams Jey with a spine-buster. Dawson goes for the cover, but Jey kicks out at two. Wilder tags in, as does Jimmy. Jimmy superkicks Wilder and then Dawson, and then The Usos superkick Wilder and get the pin fall.
Winners: The Usos

Back to the Kickoff Show panel, and they run down the card once more.

The show opens with a video package hyping the matches on the card. Corey Graves, Michael Cole, and Renee Young are on commentary.

A vignette for WWE Stomping Grounds airs. It will be Sunday, July 23rd from Tacoma, Washington.

Lesnar and Heyman are still at ringside. Lesnar begins walking up the ramp, and then grabs the briefcase from Heyman.

The Miz and Jinder Mahal talk about the 50-Man Battle Royal and how they are going to win it. Mahal also talks about getting the WWE 24/7 Championship back.

The video hype package for the match between Roman Reigns and Shane McMahon airs.

Byron Saxton interviews Kofi Kingston and Xavier Woods backstage. Kingston says he was beat down two weeks ago, but got back on his feet like a champion is supposed to do. Woods hypes up Kingston’s return trip to Ghana and Kingston says he is fighting with purpose after that trip.

3-on-1 Handicap Match: Lucha House Party (Gran Metalik, Kalisto, and Lince Dorado) vs. Lars Sullivan
Kalisto starts the match with Sullivan. Sullivan backs Kalisto into the corner and drives his shoulder into him. Sullivan clubs Kalisto across the back and slams him into the turnbuckle. Dorado tags in and connects with quick strikes, but Sullivan clubs him down to the mat. Sullivan picks Dorado up, but Dorado fights out. Sullivan quickly dumps Dorado to the floor. Sullivan tosses Dorado back into the ring and takes him down with a shoulder tackle. Sullivan shoves Kalisto to the mat and punches Dorado to the floor. Metalik tags in and kicks Sullivan a few times. Metalik connects with an elbow and Kalisto attempts a cross-body. Sullivan tosses him into the corner and clotheslines him in mid-air. Kalisto comes back and sends Sullivan to the floor. Sullivan gets back into the ring and knocks Metalik to the floor.
Sullivan slams Kalisto to the mat and then delivers cross-face shots. Sullivan goes up top, but Dorado and Metalik cut him off. They stomp away on him and the referee calls for the bell.
Winner via disqualification: Lars Sullivan
-After the match, LHP continue to beat down Sullivan and escape the ring. Sullivan goes after them and beats them all down.

The video hype package for the match between Randy Orton and Triple H airs.

Footage of Jinder Mahal pinning R-Truth for the WWE 24/7 Championship at an airport and then Truth pinning Mahal on the plane to get the title back is shown.

Backstage, Baron Corbin interrupts Byron Saxton. He says the referee cost him the match and says he is not going to stand for it.

Ali and Samoa Joe talk about the 50-Man Battle Royal and how they are going to win it.

The video hype package for the match between Kofi Kingston and Dolph Ziggler airs.

Winner: Mansoor
-After the match, Mansoor says he stood in Jeddah one year ago as a WWE prospect and tonight, he won the most historic battle royal in WWE history and his dream came true.

The video hype package for the match between Goldberg and The Undertaker airs.