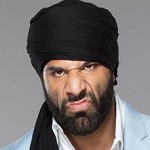 With the Super Showdown event less than 24 hours away, one title has already changed hands.  Today, Jinder Mahal pinned R-Truth on an airport tarmac, to win the WWE 24/7 Championship for the second time.

This is the 10th time the 24/7 Championship has changed hands since it was introduced by Mick Foley on the May 20th Monday Night RAW.  Mahal had pinned Truth on a golf course on Sunday June 2nd to win the title, only to lose it back to Truth later that day, again on a golf course.