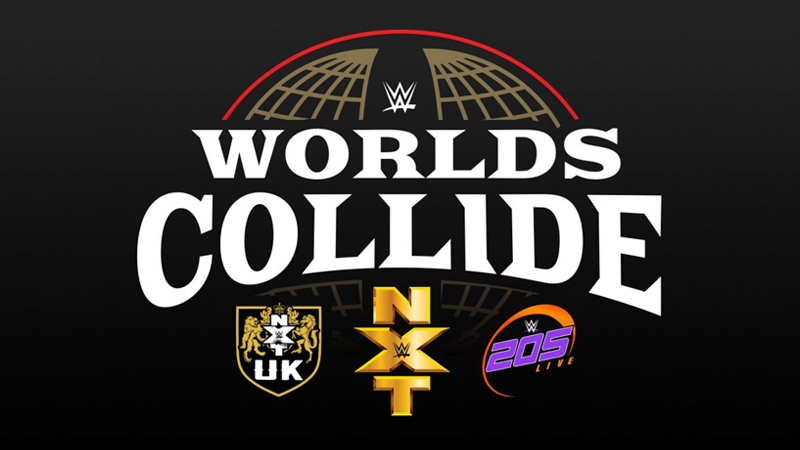 Aiden English and Tom Phillips welcome us to the show.

Match #2 – Tag Team Match: Flash Morgan Webster and Mark Andrews vs. Ariya Daivari and Mike Kanellis
Andrews and Daivari start the match. Kanellis tags in immediately, but tags Daivari back in. Kanellis tags back in, and then Daivari does as well. They lock up and Daivari applies a wrist-lock. Daivari drives his shoulder into Andrews a few times, but Andrews comes back with a few arm drags. Daivari slams Andrews to the mat and then takes him to the corner and punches him down to the mat. Daivari applies a side headlock, but Andrews comes back and takes him down with an arm drag. Andrews applies a shoulder bar, but Daivari gets back to his corner. Webster tags in, as does Kanellis. They lock up and Kanellis applies a side headlock. Webster sends Kanellis off the ropes and takes him down with an arm drag. Webster drops Kanellis with a hurricanrana and then a drop toe hold. Webster applies a front face lock, but Kanellis comes back with a body shot.
Andrews tags in and he and Webster double team Kanellis. Andrews goes for the cover, but Kanellis kicks out at two. Webster tags back in and stomps down onto Kanellis. Webster knees Kanellis in the face, but Daivari distracts him. Kanellis drops Webster with a clothesline and tags in Daivari. Daivari pounds away on Webster. Kanelis tags back in and keeps control over Webster. Kanellis drops down and goes for the cover, but Webster kicks out at two. Kanellis connects with a right hand and tags Daivari back in. Daivari drops an elbow on Webster and tags Kanellis back in. Kanellis knocks Andrews to the floor and then slams Webster into the corner. Kanellis connects with a clothesline and then a boot to the face. Kanellis goes for the cover, but Webster kicks out at two. Daivari tags back in and drives his knee into Webster’s back.
Daivari applies a side headlock and keeps Webster grounded. Webster comes back with a boot to the face and then drops Daivari to the mat. Kanellis tags in, as does Andrews. Andrews takes Daivari and Kanellis down with a double cross body and Daivari tags back in. Andrews delivers an enzuiguri and then stomps onto Daivari. Andrews connects with a standing moonsault and goes for the cover, but Daivari kicks out at two. Andrews drops Daivari with a DDT and Webster kicks Kanellis in the face. Andrews flips onto Daivari and goes for the cover, but Kanellis breaks it up. Kanellis and Daivari get sent to the floor and Andrews and Webster take them out with suicide dives. Webster tags back in, but Daivari shoves Andrews into him in the corner. Kanellis tags in and drops Webster with a spine-buster. Kanellis goes for the cover, but Webster kicks out at two.
Daivari grabs Webster and Kanellis goes for a superkick, but Webster moves and Kanellis kicks Daivari. Webster headbutts Kanellis and tags in Andrews. Andrews his Stundog Millionaire and tags Webster in. Webster hits the top rope senton and gets the pin fall.
Winners: Flash Morgan Webster and Mark Andrews

Match #3 – Triple Threat Match: Albert Hardie Jr. vs. Gran Metalik vs. Ligero
Hardie kicks Ligero in the face and applies a side headlock to Metalik. Hardie drops Metalik with a dropkick, but Ligero comes back and takes him down. Ligero connects with a hurricanrana and then a dropkick. Metalik comes back and kicks Ligero in the head and then delivers a dropkck from the ropes. Metalik goes for the cover, but Hardie breaks it up at two. Hardie sends Ligero to the floor and delivers an inverted atomic drop to Metalik. Hardie goes for the cover, but Metalik kicks out at two. Hardie keeps Ligero grounded and applies an abdominal stretch to Metalik. Hardie turns it into a cover, but Metalik kicks out at two. Ligero gets back into the ring and rolls Hardie up for two. Hardie chops Ligero a few times and then delivers an enzuiguri. Hardie goes for the cover, but Metalik breaks it up at two.
Metalik chops Hardie, but Hardie sends him to the floor and takes him out with a suicide dive. Hardie knees Ligero in the face and then rips at his mask. Hardie grinds his boot into Ligero’s face and then chops him in the corner. Hardie applies an abdominal stretch, but Metalik kicks him in the face. Ligero drops Metalik and then exchanges shots with Hardie. Metalik takes them both down with a springboard back elbow. Metalik kicks Ligero in the face and drops him with a reverse slingblade. Metalik sets up for the Metalik Driver, but Ligero gets free. Ligero kicks Metalik in the face, but Metalik takes him down with one of his own. Metalik takes Hardie down on the floor and then splashes down onto Ligero. Metalik goes for the cover, but Ligero kicks out at two. Metalik goes for the Metalik Driver, but Hardie breaks it up.
Metalik kicks Hardie in the head and hits the Metalik Driver this time. Metalik goes for the cover, but Ligero breaks it up. Ligero kicks Metalik in the face and then hits a stunner. Hardie comes back and sends Ligero to the mat with a German suplex. Metalik is sent to the floor by Ligero and then Ligero drops Hardie with a tornado DDT and gets the pin fall.
Winner: Ligero