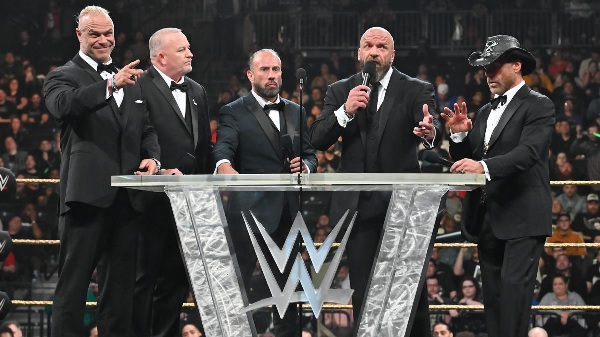 – In August 1997, Triple H and Chyna aligned themselves with Shawn Michaels to form “Degeneration X.”
– Michaels laid down on the mat on December 11, 1997, in Lowell, MA and Helmsley covered HBK to claim the WWF European Heavyweight title.
– The night after Wrestlemania XIV, Helmsley announced that Michaels had “dropped the ball,” and recruited a DX army consisting of the New Age Outlaws and X-Pac.
– One night after Wrestlemania XIV, Waltman was introduced on “Raw” as the newest member of Degeneration X. He used the occasion to shoot on Bischoff and “Hollywood” Hogan, claiming that Hall and Nash were being held hostage by WCW.
– DX and the Nation feuded during the summer of 1998, which lead to a ladder match for the IC title against The Rock at Summerslam. Helmsley, now calling himself Triple H, won back the title.
– At In Your House 24, D-Generation X (X-Pac, Billy Gunn & Road Dogg) defeated Jeff Jarrett, Dennis Knight & Mark Canterbury
– The reunited DX (Triple H and HBK) defeated the Spirit Squad in a “handicap” match at Vengeance ’06.
– At Summerslam ’06, DX defeated Vince and Shane McMahon.
– DX defeated Vince McMahon, Shane McMahon and The Big Show in a “hell in the cell” match at Unforgiven ’06.
– At Survivor Series ’06, Team DX (DX, CM Punk, and the Hardy Boyz) defeated Randy Orton, Edge, Gregory Helms, Johnny Nitro and Mike Knox.
– At Summerslam ’09, DX (Triple H and HBK) defeated Legacy (Cody Rhodes and Ted DiBiase).
– At Hell in a Cell ’09, DX defeated Rhodes and DiBiase in a “Hell in a Cell” match.
– DX (Triple H and HBK) defeated Chris Jericho and The Big Show at TLC in San Antonio, TX in a TLC match to capture
the WWE Unified Tag Team championship.
– On April 6, 2019, DX was inducted into the WWE hall of fame.