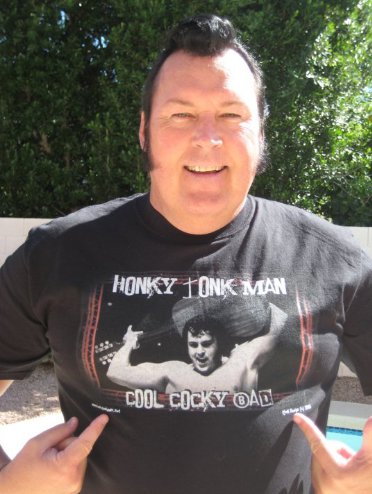 Honky Tonk Man spoke with CBS Sports about the announcement that he will be part of the WWE 2019 Hall of Fame Class. Highlights are below:

On his return at the 2013 “Old School” Raw and hitting Heath Slater with a guitar: “After all these times of being such a bad guy, I was cheered like I had never been cheered before. After being booed out of all these buildings for so long, they loved me and it was great seeing that. It was exhilarating and fun and I carry that with me. Someone asked me not too long ago what I missed most about WWE, and I said, ‘Everything.’ There is nothing like having that championship and going out and doing radio and TV talking about it. And I was a good bad guy. Some of these kids who are now 40 said they were watching when they were 8 and they thought they could beat me. People wanted me to lose and they didn’t care who I lost to.”

On his own guitar skills: “I have to be like brutally honest: I know nothing about playing the guitar, absolutely nothing. Hillbilly Jim, who could play a million songs and has been playing guitar since before he could walk, tried to teach me how to play a couple of chords, and I just couldn’t do it. I’ve had a couple of really good guitar players come up to me and say, ‘You have to know how to play guitar because no one could play that bad.’”

On his Intercontinental Championship run: “I’m not going to sugarcoat it and say that everything came easy and [being champion] was a lovely walk because it was grueling. It was fantastic but it was grueling. We put a lot of time and effort into it to entertain the fans the best we could as WWE wanted us to do it. It was exhilarating. To be out there every night, there was electricity in the air.”

On coming home to WWE: “WWE is the place to be. For me, it’s the only place I have ever wanted to be. It’s the place that if I’m ready to finish up, that’s where I want to be. It’s home for me because I have so many fond memories of everything that has been accomplished by WWE and from what I’ve accomplished myself. It wasn’t me alone, it was a huge team effort. That is what’s amazing and what is so great about being part of the WWE. The door is open to you and it’s up to you if you want to walk through it. I look back on everything and for some unknown reason, everything has a meaning. The timing, everything about this year in the 2019 Hall of Fame, everything was lining up perfectly. I never dreamed it was going to happen and would tell people that it’s something I don’t think about every day of my life. But to be able to be part of this, it’s hard to explain.”