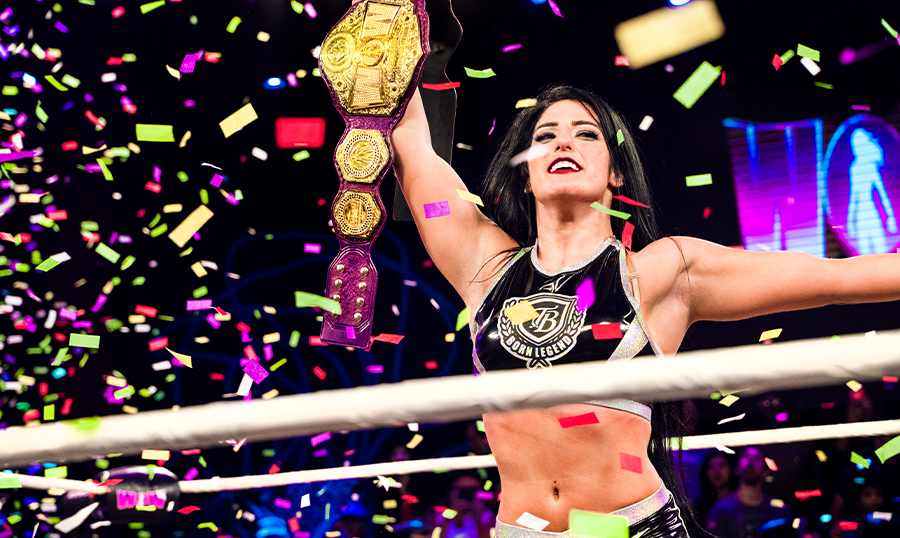 It is the dawn of a new era in WOW – Women Of Wrestling. Friday night, February 15, 2019, on the AXS TV broadcast of its newest hit show, WOW, Tessa Blanchard became the youngest champion in the league’s history by pinning Jungle Grrrl to capture the WOW World Title. This landmark victory ended Jungle Grrrl’s 18-year winning streak and serves as the launching point for the next chapter of the WOW Superheroes saga.

Tessa Blanchard represents wrestling’s past, present, and future. Her family name possesses such a rich history in the industry. Her grandfather, Joe Blanchard, promoted wrestling in the South West and was the first promoter to bring professional wrestling to cable television. Her father, Tully Blanchard, lays claim to WWE Hall of Fame status and her stepfather; Magnum TA is one of the most respected wrestlers within the industry. She is currently one of the most sought after names in all of sports and entertainment. And at 23 years of age, she stands poised to carry the women’s wrestling industry on her shoulders for several years to come.

“I always get what I want,” Tessa Blanchard said. “I took the steps necessary to insure I would get a shot at the WOW title, and when I did, I won it. That is the hallmark of a champion, setting goals and achieving them.”

Making history presents itself as nothing new to Tessa. She has several accolades to her name, including being the first woman to wrestle in the country of China. She has won championships in every promotion that has courted her. Fans from all walks of life cheer her and vilify her. Most recently Sports Illustrated recognizing her as undeniably one-of-the best in the industry.

Her victory over Jungle Grrrl did however include controversy. Following a Triple Threat Championship Match the week before whereby Jungle Grrrl had landed the Splash off the third rope on to Tessa followed by pinning Tessa’s shoulders to the mat for a victory, WOW officials held the championship up in light of Santana Garrett holding Tessa’s legs down at the same time of Jungle Grrrl pinning Tessa. With the rules of a Triple Threat Match requiring there be one competitor winning the match, not two, WOW determined a match between Santana Garrett and Jungle Grrrl would take place to determine the championship. Santana Garrett decided to forfeit her chance to be in this match to attend to her father who was suffering from health issues brought on in part by Tessa Blanchard choking her father weeks earlier. These events set up the former champion Jungle Grrrl battling Tessa for the championship. During the match, Jungle Grrrl had all the momentum on her side, and actually pinned Tessa for over six seconds causing fans to cheer her seemingly victory if it were not for the referee had taken a hit moments before the pin that left him unconscious outside the ring. As Jungle Grrrl rose to check on the fallen official, The Beast, hit the ring and speared Jungle Grrrl and then gave her the Beastmode Powerbomb. The Beast then leaped to the ringside floor to toss the referee into the ring just in time to gain consciousness and see Tessa haven taken advantage of the opportunity by wrapping the dazed Jungle Grrrl’s legs and pinning her to the mat. When the referee counted to three, a new day in WOW history was cemented.

Tessa is now the WOW World Champion. And with her WOW victory Tessa Blanchard has firmly established herself as the Born Legend™.