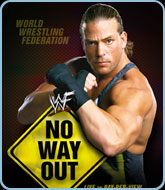 1996 – At a house show in Baltimore, Lex Luger defeats Johnny B. Badd, to win the WCW World Television Championship.

1997 – In the Monday Night Wars, WCW Monday Nitro (2.9 TV rating) beats WWF Monday Night RAW (2.1 rating). On Nitro, Prince Iaukea defeats Steven Regal, to win the WCW World Television Championship.  Over on RAW, Sycho Sid defeats Bret Hart, to win the WWF Championship.  Stone Cold Steve Austin had interfered and hit Bret with a steel chair, while Hart had the sharpshooter applied on Sid. Hart had just won the title the night before, at the In Your House: Final Four pay-per-view.

1998 – Randy ‘Macho Man’ Savage receives Harvard Lampoon’s “Real Man” of the Year Award. The humor magazine gives out the award every year to “that male specimen of the human species who best exemplifies universal manliness.”

2001 – At a house show in Cedar Rapids, Iowa, Steve Blackman defeats Raven, to win the WWF Hardcore Championship. With the 24/7 rule in effect, Raven later pins Blackman, to reclaim the title.

2002 – WWF No Way Out is held in Milwaukee in front of 15,291 fans.  The event is notable for the original nWo trio of Hollywood Hogan, Kevin Nash, and Scott Hall making their return to the WWF.  Hogan had left in 1993 while Hall & Nash left in 1996. The three address the crowd in the ring, to open the show. They tell the crowd they want a clean slate, didn’t want any trouble, and were grateful to Vince McMahon for allowing the them to return to the WWF.

2007 – Mike Awesome, a two-time ECW World Heavyweight Champion, an ECW World Tag Team Champion, and WWF Hardcore Champion, commits suicide by hanging himself inside his home in Tampa.  He was 42 years old.

2009 – Sarah Stock, aka Sarita, signs a contract with TNA Wrestling.

2017 – Former pro wrestler, wrestling valet, and body builder Nicole Bass dies at the age of 52, after suffering a stroke.