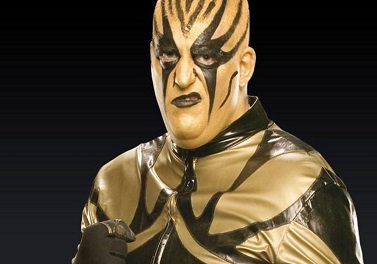 In an interview with Sports Illustrated, Goldust spoke about his very first appearance on WWE TV, which actually wasn’t as Goldust but as Dustin Rhodes. He appeared on an October 1990 edition of Saturday Night’s Main Event in an angle with his father Dusty, Ted DiBiase and “Macho King” Randy Savage. Here are highlights:

On his first appearance: “The night we started that angle, we were in Toledo, Ohio, and DiBiase was buying all the front row seats, giving $100 bills for everyone to move away so he could take their seats. Older wrestling fans will remember they had those old wooden folding chairs, not the metal ones, and DiBiase swung one at my head like a dart, like he was stabbing me,” said Rhodes. “He hit me in the head and split me right open, which is what we call a ‘hard way’ in this business, and the moment was electric. The crowd erupted, Dad came over to protect me, and the blood was rushing down my face. I remember DiBiase apologizing before I went to the hospital to get stitched up, but I told him I was so happy that I didn’t even want to wash off the blood. That led to some tag matches with my father, which were indescribable. Every one we did was more special than the last.”

On the evolution of Goldust: “I’ve kept evolving the character. At first you hated Goldust with a passion, then you laughed with him. You loved him, you hated him again, and 24 years later, I can try to be the meanest, dirtiest heel in the business, but people are still going to love me. And I love them, too. The landscape for professional wrestling has changed, and there are very few that can go out there and get good heat anymore. And it would be no good for me to try that, as people have grown to accept and love Goldust.”

On Cody and All Elite Wrestling: “I hope this really takes storm and becomes something formidable. You need places to go and work, competition is great and it is the best thing that can happen for WWE. I am very proud of Cody, and I know Dad would be so proud and happy for Cody. He has a great mind for the business, he’s done so much already, but he’s paid attention and learned from mistakes. He’s fought for what he has, and his work in AEW will show that.”