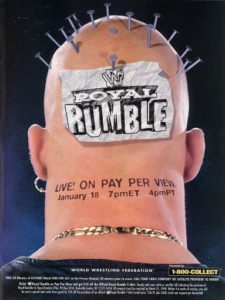 1982 – Adrian Adonis defeats WWF Champion Bob Backlund in a non-title match.  Adonis is declared the winner after the referee stops the match, due to Backlund excessively bleeding.

1986 – Scott Hall & Curt Hennig defeat Steve Regal & Jimmy Garvin, to win the AWA World Tag Team Championship.  This is labeled as a “Phantom Match,” to cover for Steve Regal (not to be confused with William Regal) leaving the AWA while still a tag team champion.

2007 – WWE announces the release of eleven superstars, a majority of them from the ECW roster: C.W. Anderson, Doug & Danny Basham, Gangrel, The Gymini (Mike & Todd Shane), Jazz, Rodney Mack, Tony Mamaluke, Sylvester Terkay, and Al Snow. Snow was released as a wrestler, but was retained by WWE to work as a trainer for Ohio Valley Wrestling (OVW), which was a WWE developmental territory at the time.

2008 – Ring of Honor’s Undeniable airs on pay-per-view, albeit on a three-month tape delay.  In the main event, Nigel McGuinness defeats Takeshi Morishima, to become the new ROH World Champion. Ring of Honor recognizes McGuinness’ reign as beginning on October 6, 2007, the night of the pay-per-view taping.

2017 – The CMLL World Mini-Estrella Championship is vacated by Astral, after he opts to move up to the regular division and could no longer be considered a Mini-Estrella.

This Day In Wrestling History for January 19th will be posted later tonight.