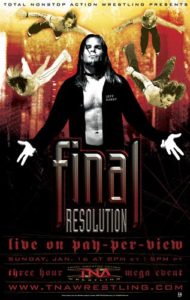 1993 – On WCW Saturday Night, Dustin Rhodes defeats Ricky ‘The Dragon’ Steamboat, via count out, and is declared the winner of the vacant WCW United States Heavyweight Championship.  Steamboat was counted out after Barry Windham hit him with a DDT on the concrete floor outside the ring.  The title had been vacated by Rick Rude a month earlier due to injury.

2000 – WCW Souled Out is held in Cincinnati in front of 14,132 fans.  Bret Hart (severe concussion) and Jeff Jarrett (lingering headaches) had be replaced and had their titles vacated prior to the event.

– Billy Kidman defeats Dean Malenko, in a Catch-as-Catch-Can Match.  Malenko had rolled out of the ring to regroup, but match stipulations state that a wrestler could win if his opponent’s feet touched the floor.
– Vampiro defeats David Flair and Crowbar (with Daffney), in a Handicap Match.
– Big Vito & Johnny the Bull defeat The Harris Brothers (Ron & Don).
– Oklahoma (portrayed by Ed Ferrara) defeats Madusa (with Spice), to win the WCW Cruiserweight Championship.
– In a Fatal 4-Way Match, Brian Knobbs defeats Meng, Fit Finlay, and Norman Smiley, to retain the WCW Hardcore Championship.
– Billy Kidman defeats Perry Saturn in a Bunkhouse Brawl.
– Booker T (with Midnight) defeats Stevie Ray by disqualification.
– Tank Abbott defeats Jerry Flynn.
– Buff Bagwell defeats Diamond Dallas Page, in a Last Man Standing Match.
– The Wall (with Shane Douglas) defeats Billy Kidman, in a Caged Heat Match.
– In a Hardcore Match, Kevin Nash defeats Terry Funk, to become the new WCW Commissioner.
– Chris Benoit defeats Sid Vicious via submission, to win the vacant WCW World Heavyweight Championship.  Arn Anderson served as special guest referee.  Benoit’s title win was an effort by WCW to keep him from leaving the company.  It was to no avail; Benoit would quit WCW the day after the Souled Out pay-per-view and drop the title.  Despite winning the title, Benoit still had disagreements with management, and was not in favor of Kevin Sullivan’s promotion to head booker, replacing the team of Vince Russo and Ed Ferrara.

2014 – Impact Wrestling: Genesis is held in Huntsville, Alabama with 1,400 in attendance.  The event aired on Spike TV, rather than on pay-per-view like previous years.